Difference between revisions of "Gran Verionia"

The Verionian Empire is an isolated, secluded and autarkic nation in South-East Keltia. The Empire, which is largely covered by deserts and plains, is a loose federation of nomadic tribes, semi-autonomous city-states and the reigning Imperial House of Verion, which since their arrival from Benacia attempts to solidify the realm. It was established following the Great Disaster that saw the decimation of the Republic of Verionist Benacia. Having previously been involved in international trade, and enjoyed limited contact with neighbouring countries, the Verionian Empire follows a policy of complete seclusion from the world since 1676. Following the implementation of this policy, which is known as the divine isolation, the Empire has effectively become a Hermit state.

Realms of the Empire

The Verionian Empire is a federation of a number of diverse political units and realms, often with different degrees of loyalty to the central government in Valarion. Although all realms of the Verionian Empire are on paper united under the House of Verion, and the Imperial Government retains the de jure control over the armed forces and most legislative matters, the degree in which these laws are enforced varies greatly. 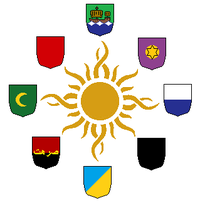 The Arms of the Realms of the Verionian Empire

The Realms of the Empire are represented in the Imperial Conclave.

Home of merchants, shipbuilders and the Verionian navy, the Free Port of Al-Qalea is a city alligned with the Mercantile Realm of Souf. It was granted the status of Free Port as a priviledge by the Rashdir of Souf, after the Qalean navy rescued the merchants of Souf after the collapse of the Gerenian empire. In the turmoil that followed, the Qalean navy acted as a protection against potential imperialist invaders, such as the Palliscians. The Free Port of Al-Qalea is generally loyal to the Verionian leadership, under which it continues to enjoy its special privileges.

The Island of Keraq is the furthest away from the main Verionian dominions. As such, it has developed the status of an outlier and a somewhat rebellious place. Trade is important for the Keraqi, and the isolationist policies of the Verionian leadership have impoverished the elites of Keraq. For that reason, a strong movement for independence has emerged on the island. So far, major conflicts have been avoided between the Keraqi and the Verionian leadership.

The nominal capital city of the Verionian Empire, the Ancient Walled City of Sarhat is located next to the realm of the Toroshi and functions as a bridge between the desert realms and the seaports of the Empire.

Originating as a federation of trade cities around the strait of Souf, the Mercantile Realm of Souf is one of the richest parts of the Empire. The Realm enjoys a moderate climate and as such has been able to develop in one of the most populated parts of the state. The Mercantile Realm of Souf was among the earliest supporters of the House of Verion, due to the presence of the Iron Company in the area. Together with the Imperial City of Valarion, it constitues the Verionian heartland. 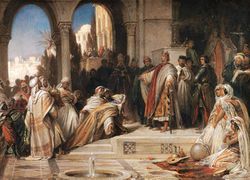 The largest part of the Empire is covered by the Roqq desert. This desert is inhabited by tribes, most of which are nomadic, although several have become more attached to a specific part of the desert. Almost all tribes have far-reaching autonomy. In 1675, shortly after the official establishment of the Empire, the tribes, who had for centuries met at the city of Torosh for an annual gathering, declared their loyalty to the Elu Verion. In exchange for the loyalty of the tribes, Elu Miqah Verion granted the tribes a special status, and allowed them to govern themselves to a large extent. 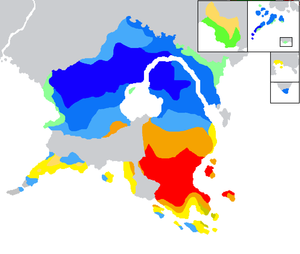 The Verionian Empire is, aside from its holdings in Benacia, located in South East Keltia. The Empire covers a large area on the Keltian mainland, as well as a group of islands in close proximity. Roughly two-thirds of the nation is covered by desert. The largest desert of the country is known as the Roqq desert, or Central desert. As a result of its climate, the Empire is significantly less centralised than the governmental authorities would like it to be. The deserts are mainly inhabited by nomadic tribes and the descentants of hopeful colonists.

The capital city of the Verionian Empire, Sarhat, is located on the edge of the Roqq desert. As temperatures in the summer can reach up to 50 degrees celsius, the government resides in the Southern city of Valarion, which has a much more temperate climate. The majority of the population lives in the Southern part of the Empire, mainly on the islands or on the Strait of Souf.

Geographically, the Empire can be described as diverse. In its deserts and plains, to the Qairu mountain range, the landscape is rocky, sandy and robust. In the South, the milder climate allows for vegetation, some agriculture but also semi-tropical savannas which in the rainy season colour brightly with various kinds of flowers.

The heads of the constituent states of the Empire each have a seat on the High Council. All major decisions in the Empire are made by the Council, which has an intricate system of majority voting. The High Council is chaired by the Washar, who is elected from the Councilmembers for a two-year term and serves as primus inter pares.

The number eight plays a significant role in the spiritual and political life in the Verionian Empire. Derived from a more obscure interpretation of the Star of Verion, the Empire rests on eight pillars that uphold the realm, and underpin the legal system and the laws of the Empire. The ideology behind the Eight Pillars of Foundation is mainly lifted from classical Verionism, but also from the cultures and religions of the indigenous people of the Roqq desert, and ancient myths that have survived the ages. As the Eight Pillars are part of the same Star, a symbol for life itself, they refer to each other as an ever-turning wheel of time.

The first pillar is the foundation of the governing structure of the Verionian Empire. Upon arrival from Benacia, this pillar was immediately invoked by the Verionian elite in order to justify their rule over the empire. Whereas the Benacian Verionians numbered only around a thousand, they constitute the core of the government of the Empire. Started in the late 1660s by Miqah Verion, the establishment of a central authority over the fragmented Empire has always been a project rooted in Verionian principles. The Pillars of Foundation stress that some good people in key positions need to be in charge in order to steer the ship of state in the right direction. In the case of the Verionian Empire, the House of Verion is the embodiment of this "good people" principle, as they are the direct descendents of the first Elu, and as such Children of the Light (the literal translation of the name Verion from old Elw is Son of the Light). According to this first pillar, the ruling elite should provide a good path, the laws of the Empire.

The policy of the Verionian Empire is isolation from the outside world. Although international trade is conducted, and crucial in many respects to the prosperity of the Empire, it is only conducted through the Port of Keraq, which is the only part of the Empire in which non-nationals are allowed to enter. Although the Verionian Empire shares land borders with the Palliscian Dependency of Tanah-Baru, it does not have any trade relations with this nation. This isolation is reinforced by the belief of the locals that the Palliscians are a cursed people, due to their highly disfigured appearance. Even long before the arrival of the Verions to the Empire, the nomadic tribes of the Roqq desert refused to trade with the Palliscians upon their arrival, as their local folklore and myths has long warned for the appearance of the Children of the Underworld, a cursed race that would bring sure destruction to all who enter into contact with them. The land borders with Tanah-Baruh are naturally protected by the Western Ridge, a high mountain range. The small eastern possessions of the Palliscians lie within the Great Salt Desert, the dryest and most unwelcoming part of the Empire. Even though, local militias patrol the area near the borders and will not hesitate to shoot anything that moves.

Sixth Pillar: A Stable Nation gives The Spheres of Dominion

Seventh Pillar: The Spheres of Dominion give Freedom

The Verionian Empire emerged following the Great Disaster which occured in the Verionist Republic on Benacia. On the eve of 15.XII.1675, several incidents occured in the Verionist Republic that would become the prelude to the Great Disaster. At 10 PM, the Verionist authorities issued an immediate warning to all residents in the North and West of the Republic. People were told to stay indoors, and close all windows and doors. Approximately one hour later, two large explosions were heard in the city of Zolt, followed by clouds of smoke. The Verionist Benacian Army closed down all access to Zolt and quarantined the city immediately. In the day that followed, multiple similar explosions occured in the cities of Wendor and Aurum.

As it turned out, the explosions were linked to a secret government programme known as "Sword of Revenge", which was the Verionist Republican implementation of the similarly named Kasterburger research programme. "Sword of Revenge" did not only include the development of nuclear weapons, building on the previous Shirerithian arsenal in Wendor, but also several types of biological weapons. After the first explosion in Zolt, which was caused by a malfunction in the cooling system of Reactor IV, the Titus Morvayne Research Centre was largely destroyed. This explosion caused several strains of a highly lethal airborne virus, Virus Y, to be released. The subsequent explosions in Wendor and Aurum were triggered by the Automatic Destruction System, that was instigated by a computer algorythm that had mistakenly regarded the incident in Zolt as a foreign attack. This resulted in the automatic implementation of the Chryste Redoubt Plan, which would destroy all military bases in the Country simultaneaously. Although government officals were quick to respond, they could not prevent a massive and unfortunate loss of life. The total immediate death toll of the disaster is estimated at 200,000, with up to a million people expected to succumb from biological side effects of the release of Virus Y.

The Great Disaster saw the end of the Verionist Republic on Benacia. Viceroy Regina Verion stepped down immediately, and was succeeded by Jana Al-Basani, who immediately declared a national emergency. Only two days after the disaster, Monty Crisco changed its allegiance to Shireroth. Following several emergency meetings, Viceroy Jana Al-Basani declared that the government could no longer justify its rule over Elsenar and allowed the Conclave of the People to have a deciding vote on the future of the Republic. On 17.I.1676, the Conclave voted to return back to Shireroth by a margin of 405 in favour versus 89 against, with 81 abstentions.

Although ideologican Verionists had supported giving the Conclave this vote, they could not agree with reunification with Shireroth. After less than one month of service, Jana Al-Basani resigned as Viceroy and declared that the Chryste redoubt area would remain an independent Verionist state, and that the principles of Verionism were still relevant and should be guiding the nation. She assumed the position of Viceroy of Verionist Benacia immediately after.

Meanwhile, Regina Verion, and a group of around 200 loyalists had sailed for Eastern Keltia where her uncle Miqah Verion had been residing since 1667. The Verionists joined forces with local South Keltian tribes and warlord to establish a Verionian Empire.