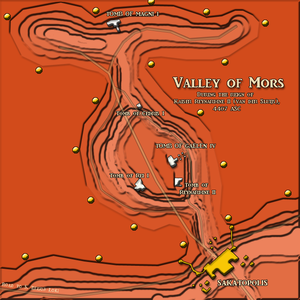 A map of the Valley of Mors.

The Valley of Mors is a valley to the Northwest of Shirekeep and located in the Imperial County bailiwck of the same name that not entirely infrequently finds itself a part of Alalehzamin under Elwynnese occupation depending on which way the political wind is blowing. The valley was named after the Cedrist God of Death, Mors, and is used to bury Kaisers and very important and influential nobles.

The Kaisers are buried in tombs which are constructed during the life of the Shirerithian Head of State. Once dead, the Kaiser is buried in a decorated tomb with important and precious artefacts. The valley itself is easily to protect as there is just one entrance, which is blocked by the temple and walls of Sakatopolis.

Guard towers are located upon the hills to avoid that, most likely Babkhan, thugs can steal the precious goods and sell it for cheap vodka. During when the guards were now employees of the Arandur of the Babkhi dominated Emirate of Alalehzamin and Utasia, the long term success of this arrangement was now open to investigation. With the arrival of the Scholae Sathrati in Sakatopolis in 1658 AN, the former guards were crucified and more satisfactory security arrangements put in place by the Imperial Government. A number of artefacts were returned by the former custodians in return for an amnesty - after a suitable interlude during which the terms were honoured the families of the thieves were subsequently collected by agents of the Crypteia, arraigned before a sympathetic magistrate and dispatched to forestry camps in Oleslaad.

The Valley was opened by Gaelen IV. However, the first Kaiser to be buried within it has been Magni I, who abdicated in favour of Gaelen IV. 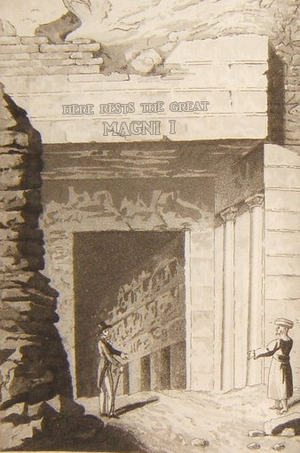 The entrance of the Tomb of Magni.

Tomb of Kaiser Magni I

The Tomb of Magni I was constructed during the reign of his successor in 4228 ASC. It became a simple tomb without too much expensive artwork. The architects, however, made it so that each afternoon when the sun is on it highest point, it lights up the room within the tomb where the Kaiser is buried.

Magni was buried in it a year after his abdication: 4229 ASC.

Construction works were started for the tomb after his ascension of the Throne and coronation. The Kaiser appointed the Gralan Fides as his chief architect, who constructed a marvellous temple for the Kaiser for just 300 Erb.

The eternal resting place of Kaiseress Isa IV Cassandrae can be found in the northern end of the Valley of Mors.

As instructed in her last will and testament (though it was written before her ascension to the throne, it was rigorously followed), the Kaiseress had wished for a simple funeral with only her closest friends and neighbours attending, and a simple headstone without ornaments and decorations (only text).

Accordingly, the Kaiser's Court, after heavy negotiations with the Court of the Prince, arranged for the funeral and burial of the late Kaiseress, as well as funding all graves' upkeep in the Valley of Mors.

The headstone is inscribed with her Elw, Farewellish and regal names, and the dates of her birth and death in Farewellish:

Construction of Kaiser Dominus Tarjeisson's tomb commenced in the year 1645 during the reign of his successor Kaiseress Noor, after regurgitated remains of His late Imperial Magnificence had been discovered. His remains were put in bio-degradable jar and subsequently placed inside a flawless, full-sized wax work figurine of the former Kaiser. The aforesaid Kaiseral effigy was in turn placed inside a jade funeral suit.

Kaiser Dominus's tomb will be hewed into the valley's limestone cliffs and will be adorned with frescos depicting edifying scenes from the Kaiser's life and reign. The Kaiser will be laid to rest in a granite sarcophagus studded with onyx and lapis lazuli. 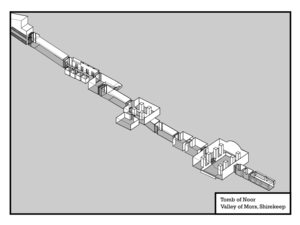 Diagram of the Noor subterranean complex.

Construction of Kaiseress Noor's tomb was initiated in mid-1645 AN. It is believed that the birth of her grandchild precipitated the decision to begin its design.

After passing through the entryway and down an unadorned corridor, one encounters a highly-decorated corridor, with side chambers that document the different phases of Noor's life and reign in painted relief. Following this, the craftsmen encountered a fault that required a redesign, realigning the rest of the tomb sideways.

The main offertory chamber, supported by four stout columns, is the furthest down portion of the tomb that remains accessible; it is decorated by images of Noor performing her sacred duties as Kaiser and high priestess. Following Noor's burial, the descending gateway was sealed and capped with an altar. Down a series of less-heavily-adorned descending corridors, the Main Burial Chamber is extensive, supported by eight stout columns and a vaulted ceiling; it is decorated with depictions of the ascended plane and prayers for the dead.

Beyond the burial chamber is a prayer hall, implicitly for the deceased Kaiseress to perform her own rituals to the gods as an intercessor to those who perform pilgrimages to her tomb. 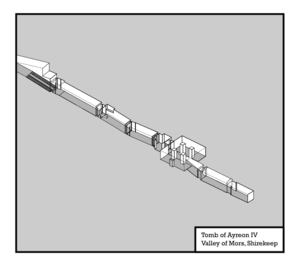 Planning for Kaiser Ayreon IV's tomb began shortly after he reach majority. Construction began slowly in 1663 AN and was put on hiatus in 1671 AN, due to the tumult of the Kalirion Fracture.

Construction only resumed in 1680 AN, after his successor, Kaiseress Salome, reached majority. In the interim, his body remained in cold storage in the depths of Raynor's Keep, under the watchful eye of his faithful concubine, Isidora IV of Octavius-Teleni. The decision had been made at this point to revise the design so as to include only as many rooms as necessary to satisfy Imperial protocol. Major excavation completed in 1682 AN, with final completion of the reliefs and frescos in early 1685 AN. This allowed for a burial to coincide with what would have been his fortieth birthday.

More modest than the one constructed for his predecessor and grandmother, its design reflected the more modest means available to the Imperial Republic during this period.

Uniquely among the tombs in the Valley of Mors, the Tomb of Ayreon IV connects to the Tomb of Noor with a false door, allowing for attendants at one tomb to pay homage to the image of the other. Ayreon IV's body was laid to rest in what, under the original plan, was intended to simply be a connecting corridor. After the plan's revision, this chamber was given additional height in order to accommodate the necessary images of the ascended plane and prayers for the dead. Ayreon IV's intercessory prayer hall is a relatively plain chamber.

Burial took place on 8.III.1685 AN, attended by the Imperial Family, courtiers, and foreign dignitaries.

Following his burial, the Imperial Mother, Isidora IV of Octavius-Teleni, commissioned the construction of a small living facility to adjoin the surface complex, so that she would be able to reside permanently on site and act as a caretaker for the location.