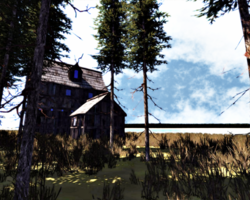 An old house overlooks the waters near the city of Vaeringheim..

Established by the Kingdom of Normark in 24.22 PSSC, during the golden age of Keltian settlement, the city of Vaeringheim sits on the timber covered northern shore of Lake Morovia, in central Keltia. Following the collapse of Normark's Keltian holdings in 24.53, the city fell into a relative state of ruin before coming under the possession of Haifan settlers during the period surrounding the establishment of the Free State of Haifa. In the coming years these Haifan settlers established a number of large, independent homesteads in the vicinity of Vaeringheim, from which they sold timber, and certain mineral resources to merchants from Haifa, Hamland, and Passio-Corum. In the years following the establishment of the Maritime Markets of the Strait of Haifa, Haifan settlers in Vaeringheim attempted to resist the appeal and influence of the spread of piracy across the Strait of Haifa. These efforts would ultimately prove to be in vain, however, when in the 35.50's PSSC Vaeringheim would come under the informal authority of Captain Ismael Hatch, a notorious privateer who operated out of nearby Black Hatch Island.

The culture of Vaeringheim is increasingly impacted by the expanding influence of Alperkin culture in the region surrounding Lake Morovia. In the period since the end of the Haifan Civil War authorities have struggled to contain the growth of a powerful Noctic-Rabrev cartel which has established its headquarters in Vaeringheim.

The primary mode of transportation in Vaeringheim is sail.

While there are no official military installations located in Vaeringheim, the city is defended by the New Zimian War League, and by the Jogi Regiment.

There are no protected areas located in Vaeringheim.