Difference between revisions of "User:Jack/Sandbox" 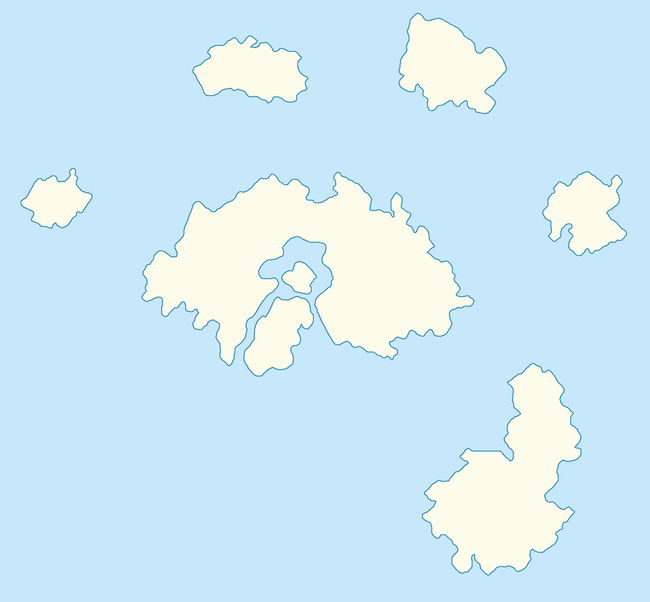 Calbion uses the Calbain calendar, which has been synchronised to the Norton calendar. A year (blwyddyn) is divided into 15 months. The Calbain calendar differs from the original Norton calendar, in that it starts to count from the arrival of Jack Mounford (Jack I) and the establishment of Calbion as a sovereign political entity in the year 1596. Years before this moment are referred to with Cyn Dyfodiad (CD), years after this moment are Ôl Dyfodiad (ÔD). 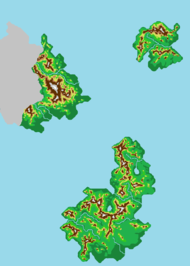 Geographical map of the Calbain lands

Calbion is an island nation with a diverse geography. The island of Calbion is mountainous and forested in the north, while in the south and the west, green valleys and lowlands dominate the landscape. Famous are the Plains of Pentyre, which are low meadows in the shade of the Arán mountains that have been the location of many crucial events in Calbain history. The Northern coast, most notably around the city of Saint Edward, has a very pleasant and warm sea climate, which makes it a particularly popular holiday destination.

Although the climate of Armoria is also warm and temperate, the island itself is mostly barren and rocky. the island is located on a sea rift, which regularly causes earthquakes in the North of the island. In addition, the North of Armoria is a location of landfall for tropical storms and cycloons. The large majority of the Armorians live in the south, as the Southern coast is largely protected from natural turmoil by the Faenor mountains. The Northern part of Armoria is, in addition to being a designated nature area, the location of several military bases and facilities.

Kilkelly has a pleasant and mild climate. Its eastern borders are mountainous and sparsely populated, but the large remainder of the talaith is characterised by green downs and plains. In the central East is the mountain range known as the Ishara mountains. It is here that we find the largest peak in all of Calbion, the Albrús, which reaches up to 3,400 meters above sea level.

Main article: Prince of the Calbain

The Cynulliad Cenedlaethol or the National Assembly is the historical legislating body of the Calbain people and was the legislative body of Calbion. Although it functioned as a parliament, the Cynulliad Cenedlaethol took the form of a triannual gathering of local representatives. The Assembly consisted of two tiers, first the High Council, which was the main governing body of the Calbain, and had both executive and legislative powers, and second the Assembly, which developed into the lower house. Procedings in the National Assembly were rooted in (often shadowy) tradition and history of the Calbain people.

The High Council (Gyngor Uchel) was the governmening council of Calbion. The council did not have a set number of members but generally has a membership of around ten. The members of this council were appointed by the Assembly.

The Assembly was the place of gathering for the 'peasants' or the ordinary people. Originally, all male heads of the Calbain families attended the National Assembly. During the establishment of the Calbain state, this slowly transformed into an indirect parliament and political factions formed. The most notable of these parties was the Plaid Calbinol, which has been the main proponent of internationally recognised independence for the Calbain nation. It governed Calbion during its time of independence, and carried the nationalist political movement during the period of Arcadian occupation. Other, smaller factions have formed as well but have largely disappeared. The small Plaid Wleidyddol Catologiadd, a party that sought to implement the principles of the Calbain religion was propped up by the Arcadian occupation government as the established government party of Calbion. As such, they, together with other conservative forces such as the Conservative party, formed the "Realist" strain in Calbain politics.

Calbion is an unitary state, but due to its expansion towards several islands, it is informally divided into three provinces, known as Talaith. The largest province in terms of population and influence is that of Calbion island. Because this island is the core of the Calbain land, and also houses the government, it does not have any local government. With the expansion of the Calbain nation, the west of the island of Thalassa was occupied and became known as the Kilkelly province, after its largest port city and capital. To the North, the island of Armoria was also brought under Calbain rule. This island was often indicated as Y Faenor, or "the mansion". This referred to the gubernatorial palace that was constructed in the late 16th century. The island is also known as Summerisle, due to its proximity to the equator and its subtropical climate.

In addition to these three core provinces, Calbion also used to have a colonial dominion, which was known as the Ffederasiwn Tiriogaethol or "Territorial Federation" of Morwlad (literally: sea land). Morwlad consisted of several colonies with limited autonomy that were mainly used as trading hubs or extraction colonies. At its highpoint, Calbion occupied the colonies of Port Impregnable, Port Moorland, Y Dwyrain and Ynys Corrach. Traces of Calbain influence can still be seen in most of these places, most notably in the Agra Fortress that was constructed in Y Dwyrain and is still one of the largest castles on Micras.

Before 1686, Calbion was divided into the three Talaith, but following the Western Expansion which more than doubled Calbion's territory, the number of Talaith expanded to seven. These seven Talaith are subdivided into Ardals.

The defense of Calbion was generally in the hands of the Order, a military organisation that evolved out of the Catologian Order headed by Jack Mounford. The Order is under command of the King as commander in chief. The Order serves as de facto armed forces of Calbion.

Besides the Order, Calbion had a navy and an air force. The Arwyr Airforce base on Y Faenor was the largest military base on Calbion.

The Calbain have always been a seafaring and trading people. Since the establishment of the Calbain state, this practice continued. Initially, the Calbain economy was largely dependent on the South Batavians, but in the late 16th century, the nation started to open trade with Shireroth, Babkha, Elwynn and Natopia. The Iron Company established presence in Calbion during the 1640s, which led to a great increase in trade and wealth. Today, Calbion remains committed to the idea of international free trade.