The Two Martyrs national football team was the football team which represented the Natopian autonomous territory of the Two Martyrs. It was a member of the CTFA, and was run by the MartDiv. The team is the official predecessor of Whales and was the official successor of Kujirashi-Wahlstadt, Walstadt, Kujirashi-Walstadt, Walstadt-Light and Greater Walstadt, and as such retained their records.

The team was founded in mid-2017 after the Two Martyrs was founded as the successor state to the Natopian autonomous territory of Greater Walstadt, itself the successor of Kujirashi-Walstadt and Walstadt. The team first participated in the 2014 qualifiers under the name of Walstadt, where they lost all their matches, before finishing with four points as Kujirashi-Walstadt in the the following year's qualifiers.

During their time as Greater Walstadt, the team also finished fourth in both of their groups for the CiboTap 2016 qualifying rounds and subsequent year's World Cup qualifiers.

Under the name of the Two Martyrs, the team first competed in the 2018 CiboTap Championships qualification rounds, where they finished bottom of their five-team group with a sole point to their name.

In the 2019 World Cup qualifiers, the team lost all eight of their matches as they finished bottom of their five-team group. Soon afterwards, the team competed in the 2019 Emerging Nations Cup, winning their quarter-final and losing their semi-final before beating Goëtia 3–1 to place third.

In the following year's CiboTap qualifiers, the team finished bottom of their four-team group with a sole point; a record that invited them to a second Emerging Nations Cup, which the Two Martyrs was announced to host. In the Emerging Nations Cup, the team won their quarter-final 3–1 over Florian Eura, their semi-final 3–0 over the Strait of Haifa and the final 3–0 over Goëtia to comfortably seal their first ever silverware. Later in the year, the Two Martyrs was succeeded by Whales. 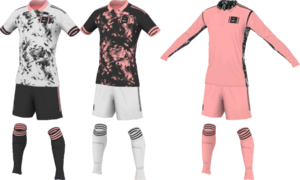 The Two Martyrs used the following flag during the entirety of its FMF affiliation: