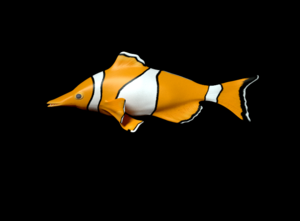 Pictured: One of the most common species in Corum, the Tuhi-Etvoy-Nas is capable of unhinging its jaw in order to swallow large prey.

Known for its hyper-aggressive behavior, this bright orange fish, which lives in the shallow waters of northern Corum, features very large, very powerful jaws. Despite its aggressive behavior, and its history of attacking humans, The New Zimian government does not permit its citizens to kill any Tuhi-Etvoy-Nas, for the reason that the species plays an important role in the local ecosystem. The Tuhi-Etvoy-Nas is not protected, however, from its natural arch-nemesis, the Bija-Illt-Eda.

Found in 11 out of 20 Pallisican cities in Corum, this species is very common. 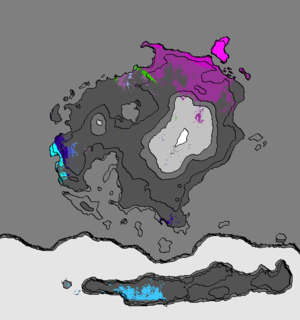 The Tuhi-Etvoy-Nas is common to over one-third of all regions in Corum, and is capable of living in a range of climates and environments.
Mediterranean Climate
Temperate Climate
Continental Climate
Sub-Arctic Climate
Polar Climate

The range of the Tuhi-Etvoy-Nas extends across 34.46% of the landmass of Corum. Most of the species' range - around 62% - lies in the warm Mediterranean regions of northern Corum, while in contrast, around 15% of the Tuhi-Etvoy's range lies in the bitterly cold polar regions of southern Hypernostria. With that said, the Tuhi can also be found in the arid regions known as the Northern Isani Sweep and the Plains of Brugge, while around 11% of the species' range lies in the sub-arctic regions of eastern, southern, and western Corum, in regions such as the Straits of Cherry Trees and the Northern Freeburg Polars.

A fresh-water fish, the Tuhi-Etvoy is somewhat common in Corum's interior regions. Around 1.65% of the Tuhi's range lies in the Riponian Highlands and the Lesser Riponian Mountains. Astonishinglhy, the Tuhi has even been observed in waterways in the southern reaches of the Central Riponian Mountains.