Played annually, the format of the Championship is simple: each team plays every other team one, with home field advantage alternating from one year to the next. Three points are awarded for a win, one for a draw and none for a loss.

If a team wins all its games without being scored against, they are said to have won a 'Grand Slam'. At the end of the tournament if a team has not scored a single goal against their opponents, it is said to have won the Wooden Spoon, although no actual trophy is given to the team. A team which has lost all their matches is said to have been whitewashed.

One competition takes place under the umbrella of the tournament. The Favour, contested annually between Gotzborg and Victoria since 2014. It is named The Favour as it is competed against by two nations that share the same Monarch, hence each is looking to hold favour with the Sovereign.

Teams are ranked by total points, then goal difference, and then goals scored. At the end of each championship, the team with the most points is crowned champion. If points are equal, the goal difference and then goals scored determine the winner. If still equal, teams are deemed to occupy the same position. If there is a tie for the championship the title is shared between them. 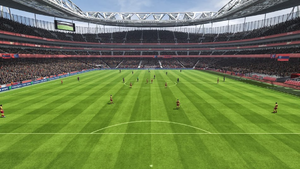 Murrayburn Stadium in Eldeburgh, the home of the Victorian Football Association.

As of the current 2014 competition, Triple Crown matches will be held in the following stadia: