The Treaty of Teldrin is an agreement between the Imperial Republic of Shireroth and the Kingdom of Ransenar that recognized the independence of Ransenar, cemented its boundaries, and established freedom of commerce and navigation between both nations.

The Imperial Republic of Shireroth and the Kingdom of Ransenar, desiring to establish between themselves a relationship based on mutual respect, cooperation, and friendship, do convene their trusted officials and representatives in the city of Teldrin, as follows:

The High Contracting Parties, the Imperial Republic of Shireroth and the Kingdom of Ransenar, do hereby agree to the following terms:

The nationals of each High Contracting Party shall enjoy the freedom of access to the courts of justice of the other on conforming to the local laws, as well for the prosecution as for the defense of their rights, and in all degrees of jurisdiction established by law.

This Treaty may only be amended, revised, enlarged and expanded upon the concurrence of both Parties. Any contrary action or measure shall be null and void.

This Treaty shall enter into force upon ratification by both High Contracting Party' governments as constitutionally stipulated.

Either party may withdraw from this Treaty provided that seven Gregorian days' written notice (defined as a post on the forums or wiki pages of both nations by the withdrawing nation's head of state, ratified by whatever legislative procedures are necessary) is given.

SCHEDULE I. Officially recognized claim of the Kingdom of Ransenar by the Imperial Regency. 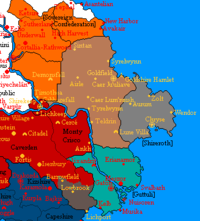 SIGNED FOR THE KINGDOM OF RANSENAR:

SIGNED FOR THE IMPERIAL REPUBLIC OF SHIREROTH: