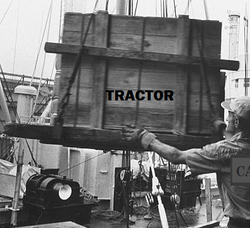 The Tractor incident was an moment of significant international tension that occurred in 1598 and involved the governments of South Batavia, Babkha and the autonomous South Batavian province of Calbion. The crisis started when the Calbain leadership attempted to increase the budget by opening the country to international trade. As the economy of Calbion was at that point in its developing state, Prince Jack I inquired during an international summit what other states would be interested in receiving in return for a significant investment in the Calbain economy. The Prince was advised by a certain figure close to the Babkhan government that Babkha would have interest in buying weaponry from the weapons plant that was created in the city of Saint Edward the year prior. After some deliberation, the parties agreed a deal to sell a large explosive device to the Babkhan government in exchange to 100,000 Shirithian erb. The weapon was shipped out some weeks later, disguised as tractor parts and arrived in Babkha after 12 days.

However, the Shah of Babkha, Ardashir Moqtada al-Osmani, refused to pay the Calbain government their due payment. This caused Prince Jack I to send diplomats to Raspur to complain about the affair, and to collect the revenue. The Southbatavian government, meanwhile, was not aware of the transaction that was made by the government of their autonomous province but found out after the visit. The complicated position of Babkha in the international realm, and the implications of a sale of a weapon of mass destruction to this government, would be severe. In the end, all governments involved denied that a weapon had ever been purchased or delivered. The Calbain government, however, felt cheated by the affair. Even though they had a brief cheer of revenge after the state of Babkha imploded shortly after, the affair marked the first tension between the Calbain leadership and the South Batavian government, eventually laying the seed for an armed conflict several years later.

Since the incident, the term "tractor" has become widely known to be a euphemism for large weapons, or illicit transactions.