International Mandate for the Settlements in Apollonia

From MicrasWiki
(Redirected from Tiegang)
Jump to navigationJump to search

The city states consists of Tiegang is a large city and port in Eastern Apollonia. It was notable for being the main port in Apollonia for the international conglomerate of the Iron Company and remained for a long time, between 1510 and the present, an important trading hub. From its early beginnings during the Antican era, to its independence as the Tyrenian city state, to its integration into Jingdao and eventually its annexation in Krasnocoria: its location and shrewd merchants allowed the city to grow and prosper, whoever its leaders might have been.

The city state came into existence when two towns, by the Jing historians referred to as Tiě and Gǎng (their Antican and Tyrenian names were scrapped from the records), started growing when the first Antican settlers arrived and met the local Tyrenians. The town of Tiě, rich of iron ore, had drawn the attention of the growing Antican empire. A sea trade route was established between Nafticon and Gǎng, whose natural harbour made trade contacts easier.

With increasing influence of the Anticans during the the early 16th century, the towns were slowly growing closer together. Eventually, the towns were merged into one city under Antican administration in 1510 AN. While being overshadowed by larger cities, Tiegang prospered. When Antica eventually collapsed at the end of the century, Marcus Lucius Praetor proclaimed it as the independent city-state of Tyrenia in 1598 AN. 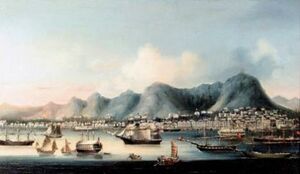 While a repeat of the earlier disaster loomed at the horizon, the Khanate of Krasnarus slowly but surely started consolidating its rule over the territory. By the 1670's, the city thrived again, now as trade port to what would eventually become Krasnocoria. Under Krasnocoria, the city gained its multicultural character: while still wearing its Jingdaoese name, more and more Krasnocorians settled in the hills and downtown. Ethnic communities of Krasnocorians, Jingdaoese, Tyrenians, Anticans and even Batavians lived - more or less - together in relative peace. 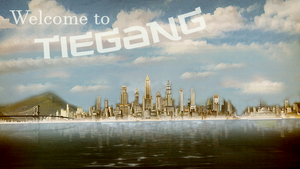 The skyline of Tiegang in 1687 AN, looking at the Bay of Augustus.

The outbreak of the civil war of 1687 AN in Krasnocoria - due to increased ethnic tensions - and the nations collapse, shaped an uncertain future for Tiegang. The increasing influence of the sultanate of Sylvania made the citizens fearful of an impending attack on their city. In the meantime, Tiegang saw a sharp increase of refugees: those who fled the war and settled in what was still perceived as a safe heaven.

The same year, Leylstadt collapsed, due to its dependence on the trade route between both Jingdao and Krasnocoria and its crippling national debt (as the Leylstadters had fled their original homelands before being resettled). A large fraction - under their former duke, Nicolas des Vinandy-Windsor, led his people westwards, into Jingdao. The folk hero and conquestador, André Vales, ignored the call to resettle in the Great Jing Dynasty. He, and a group of around 32,000 refugees fled eastwards and ended up in Tiegang.

Most of those Leylstadters had lost a part of their fortune, but not their skills. Rudolf Duytscher brought with him the recipes to restart Leylstadter Bieren, soon finding eager support from both merchants as drunks. André Vales was eventually appointed by the Council as First Consul the same year, after having proclaimed the city state independent and free (claiming that his presence alone made it a worthy successor of Leylstadt).

Faced with war and unrest, the city council called upon foreign forces to protect its interests. The request received response from Krasnocoria's allies, who sent a number of troops to garrison the city and aid the overworked police forces in keeping the peace. The new nation received the name International Mandate for the Settlements in Apollonia, as its defences were placed into the hands of the USSO's peacekeeping forces.

In Elwynn – Mishalacia especially – there was much outpouring of solidarity with their Krasnocorian kin in Tiegang. The Orthodox Church of Amokolia and Elwynn, the main religious and cultural connector of the Slavic people of Elwynn, began organizing a relief effort to assist the International Mandate. Hundreds of priests, monks and nuns, left for Tiegang in order to run hospitals in the shanty towns of the area, and organise a part of the food distribution under the auspices of the church. The Church created the Eparchy of Tyrenia for the entirety of the International Mandate's territory, with Tihon as its bishop.

As the situation in Krasnocoria developed the SS Andronikos was chartered by the Honourable Company to deliver representatives of the Expeditionary Services Brigade to the port of Tiegang to support its efforts to evacuate the Company brokerage on the island of Jaris, while Alduria-Wechua and Constancia diverted a significant naval task force towards the region in order to commence the evacuation and safeguarding of a significant Constancian expatriate population.

Despite asking and receiving military aid from the USSO, the Council made clear that the harbour would be open for everyone. Through the personal connections of Leylstadters residents, contact was made with the Alduria-Wechua Federation and the Kingdom of Batavia to establish diplomatic and trade relations. 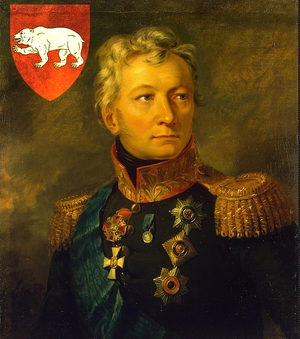 André Vales, as Knight of the White Bear in 1675 AN. He was elected by the Mandate Council as the first Consul of the International Mandate in 1687 AN, due to his good connections among traders and foreign dignitaries.

The International Mandate is administered by the First Consul, who is elected by the Mandate Council. The Consul acts as head of state and is responsible for the day-to-day affairs. As the city states' head of both state and government, the Consul exercises control over a large majority of the Mandate's sectors, including law enforcement, and foreign affairs. The First Consul is elected for a four-year term but may run for re-election. He's chosen by the Mandate Council.

The city state does not have an army of its own. Instead it relies on its police forces to keep the peace within the city borders. Its vulnerability, and the sudden collapse of the Krasnocorian state, led to a coalition of interested parties to send it troops to act as garrison. As language barriers sometimes led to difficulties with the locals, the garrisons are only allowed to guard around the border area. The police forces are responsible for what happens in the city, on water or with incoming trade goods (like customs).

Military troops can, however, be asked to interfere in riot control, especially in the several shanty towns - where people live sometimes live in appalling and deteriorating circumstances - which started to grow from 1687 AN and onwards.

Established in (1687 AN), Camp Gloucester is the headquarters and main base of the South Sea Islands Defence Force's contribution to the International Mandate Peace and Stability Force.

Stationed immediately north of the southernmost border crossing, the South Sea Islands' deployment consists of 200 infantrymen of the Combat Support Services Regiment, 10 off road motorcycles, 4 Snatch Land Rovers and a NH-76 Dromosker helicopter. The primary responsibility of the force is to reinforce the border crossing, as well as patrolling southwards along the border to the coast. In addition to standard issue assault rifles, grenades and bayonets, the deployment is also equipped with mortars, anti-tank missiles, micro unmanned aerial vehicles and shoulder-launch anti-aircraft missiles.

Camp Gloucester itself consists of a sleeping quarters, a mess hall, field hospital, vehicle maintenance facilities, a helipad and hospitality facilities. The facilities are heavily reinforced by sandbags, rock cages and earthworks, and a number of classified underground tunnels are believed to be under construction. Additional earthwork redoubts are planned along the relevant section of the border.

The unimaginatively named Naval Base is easily one of Adrestia's largest overseas military installations, and the first major independent overseas base maintained by the Adrestian government. With the arrival of Commodore Saizo Mechazawa's battleship plus its escort fleet in late 1686 to help quell the unstable situation at the city's outskirts, they were invited to build a more permanent installation on and off the coast to maintain order in the district the Adrestians now found themselves in. A large headquarters was build on a nearby island, and the Adrestian Navy wasted no time in moving off their temporary island headquarters to the south (now occupied by the Honorable Company) the moment the core buildings were complete.

The Ralgonese government, dealing with issues at home, rubber stamped the base's approval, not being able to do much about their de facto compatriot's actions. However, they were more than happy to send working class immigrants en masse to the city to assist in the Base's construction and maintenance. Such people, who were pushed out of Ralgon during the 1685 Crisis and, unable to afford Adrestia's strict and stringent real estate market, could not find a sponsor or afford go independently through the lengthy immigration process before being able to legally find employment.

Adrestia started moving assets to the massive base in earnest through mid 1687 as buildings started to go up on its headquarters on an island just off the coast, which was eventually called Mechazawa Island, after its first resident commander. This location also became the civilian headquarters of the Adrestian civilian government, with fleet operations slowly transferring to outlying islands as Adrestian merchants came to permanently occupy the ports. Commodore Mechazawa was granted a permanent seat on the Mandate Council, and was made the (mostly ceremonial) Lord Mayor of the Adrestian Quarter in Tiegang City by the Prince of Adrestia in recognition for prior efforts.

Overall fleet command transferred to Rear Admiral Sora Matsuda when he arrived in the second half of 1687. The new reinforcements of four battleships and a full-strength fleet represent a significant portion of Adrestia's current overseas assets. Half of this group remains actively deployed to support allied operations in the region. While the Fleet headquarters remained on Mechazawa Island, operations continued to shift to the outlying islands.

Mechazawa Island currently plays host to the resident Adrestian and Ralgonese populations' upper classes, as well as the government headquarters for the Adrestian Mandate. The Governor's Palace, located on parkland in the island's interior, now also hosts the Adrestian Royal Navy's command center for recently organized Fifth Fleet Command, whose requisite reinforcements are due to arrive in early 1688. 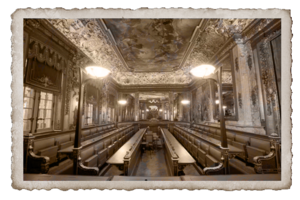 The Mandate Council in the City Hall.

The City Hall was constructed in 1621 AN, under Jingdaoese rule, after the original municipal building burnt down after it was struck by lightning. The building acted more as a meeting place between the wealthiest entrepreneurs to discuss local law and edicts. Therefore, when it was rebuilt, large investments were made to make it extravagant.

During the Krasnocorian era, between 1665 and 1687 AN, the city council grew in power and influence. The first local elections happened in 1675, and the council was eventually dissolved when the Krasnocorian civil war erupted in 1687 AN. With the declaration of Tiegang as independent state, City Hall became the meeting place of the councillors of the Mandate Council.

As certain ethnicities and councillors can't stand each other, both verbal as fist fights have been reported as an occasional pastime (with the Ralgonese Saizo Mechazawa being unofficially named as current winner). Gambling between city clerks is not unusual, as some wager a bet about the outcome of a fight with their hard earned wages.

Remnants of a military ship, dating back to the Tyrenian independence days. A major tourist attraction.

Located in the Bay, lies Mogui Prison Island, translated as devil prison island. It has acted as a place to lock up all kind of criminals. These days, most of the prisoners are forced to do some kind of labour as part of rehabilitation. The project was met with mixed results and received criticism from trade merchants, as they couldn't compete with the cheap labour prices of the prison management.

Corruption among prison staff has been reported to be rampant, but the Council has chosen to ignore matters as long as not too much excesses get leaked to the public.