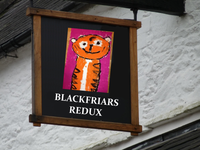 Discerning patrons discuss neither the meaning nor the provenance of the sign hanging from the exterior of the establishment, as they know all too well the dreadful penalties that the answer will inevitably entail.

The Blackfriars Redux, established 1687 AN, is a fortified public house located in the International Settlement of Tiegang that has been built up within the ruins of a 16th century Antican angle bastion. Situated on the interchange of Mabutingti Avenue and Commerce Street, the establishment's proprietor is a disgraced former civil servant from Albion who found his way into the International Mandate amongst those displaced by the Sylvanian National Awakening.

Located approximately midway between Camp Gloucester and the pier for the boat to Residency Isle, The Blackfriars Redux is frequented by both the Honoured Sons and personnel from the SSIDF contingent of the International Mandate Peace and Stability Force, as well as by a conspicuous group of Babkhan exiles who, by custom and cudgel practice, monopolise the far corner of the Lounge Bar. In view of its position a considerable distance out of town the Blackfriars redeveloped an adjacent magazine building, formerly use for the storage of munitions, into a hotel, and provides an armoured battlewagon escorted bus service to Camp Gloucester and to the main settlement.

The interior of the Blackfriars Redux was designed by Frederick Fuller-Poole Sahib, who had trained with the Design Bureau of the Honourable Company during the 1670's, learning his craft at the Marcellus Paixhans School of Design in Lindström (Natopia). The work was executed by forty craftsmen imported from Eura and Nova England and paid at fourteen Alduro-Wechua écu per hour and a monthly stipend of beer and opium. The opium allocation was phased out as the realisation dawned that corrections to works undertaken at the end of month were delaying the completion of the project.

The decorations took the form of a series of larger copper relief scenes depicting the exploits of the Blackfriars of Old Babkha, the honest traders who had plied the seas - waylaying unwary cargo haulers - in the aftermath of Eura's atomic immolation, and uplifting scenes of those same traders selling their newly acquired wares to appreciative Jing merchants along the quayside of Tiegang.

The Lounge Bar is decorated in bands of alternating Baatharzi marble, the entrance to which being located to the right of the main atrium via three rounded horse shoe arches. Above these three entrances is an improving copper relief scene depicting the Blackfriars in the foreground examining their wares and preparing a light breakfast of fried eggs, ham cut from the joint, and frothing mugs of beer, whilst in the background a sinking ship burns upon the ocean, illuminated by the beams of the radiant sun.

Within the rectangular lounge area the eponymous bar, formed of solid polished cedar wood and walnut, takes up two thirds of the far wall to the viewers right. In the remaining third of this section may be found the Babkhans who have claimed the area for their own and watch with wary suspicion any who enter into the lounge. The barman may be frequently found in conversation with these gentlemen.

Seating, both bar-stools and reclining chairs with walnut arms, are covered with an aged leather of indeterminate origin, and arranged around low tables of mahogany, which are carved with ornate geometric patterns of Euran provenance, are positioned in such a way as to be companionable rather than snug.

Air conditioning is provided by a pair of renegade Jing positioned in a recessed ceiling alcove. Customer discretion is however assured as these Jing were purchased from a Silver Yak Horde trader in a singular condition - their eyes having put out, their eardrums punctured, and their tongues surgically removed. For these Jing however, who presumably fell afoul of the natives during the evacuation of Leylstadt, their present employment, no matter how monotonous and humdrum, must be considered an improvement upon the frightful conditions of the continental interior.

Positioned between the three archways permitting access into the lounge area may be found two mahogany bookshelves, extending from floor to ceiling, filled with an eclectic variety of books and board games. The reading matter available to patrons being of a diverse nature, encompassing engineering, military history, politics, psychology, sociology, religious tracts that verge on the heretical, and a considerable number of trashy and well thumbed paperback novels. Copies of The Aldurian Sun, the Daily Lightbringer[1], and the ESB Intelligencer, are available from a rack hung close by the bar, which can be accessed without difficulty once the Babkhans seated in the corner are convinced that they can abide your presence.