The Super League, referred to as the Florian Super League to avoid confusion with other similarly named competitions, is the highest level rugby league competition in the Florian Republic and is the highest level of professional rugby league in Apollonia. It is run by the Florian Rugby Football League and is contested by 18 teams with the top eight teams entering the postseason playoffs. All 18 teams are based within the Florian Republic. Previously, the league had a team from Freeland which then withdrew from the league after its inaugural season. They have also been interests of teams from Etourney entering the league and an Etournian team is currently in the lower levels of the Florian rugby league system. There is the use of promotion and relegation in the league with the three bottom teams of the league being relegated to Florian Super League 2. It is the most viewed and attended rugby league club competition on Micras after the league broke attendance and viewing records in its second season.

Matches are played from February to September and the season culminates in the leagues' playoff final, the Florian Super League Grand Final. The second most popular sporting event in the Florian Republic after the President Bowl. The teams which reach the Grand Final, qualify for the Rugby League World Club Challenge.

After the formation of the league. The organisers of the competition released a plan to expand the game to new cities domestically and abroad. They planned to expand the league to 20 teams. On November 21st, 2017, the Florian Super League committee openly addressed proposals for two clubs to be entered into the league for the 2019 season. Five franchises applied for Super League status. At the end of the month, the league's current members voted on each application and Birmingham Titans and the Southern Storm (originally to be based in Blyth but now Oldhaven) were accepted after gaining almost unanimous votes. The Wolfpack was also awarded a license but they were denied automatic promotion in a decision made in January 2018. The two other applicants, the Southern Knights and Coldley Panthers were accepted into the Semi-Professional leagues. In a very controversial decision, a last-minute bid for Super League status in 2018 from KR Viten Sharks was accepted after Northcliff Broncos were revoked a license. The Wolfpack was angry about the decision but an appeal was rejected. In the process, KR Viten Sharks became the first foreign team to play in the Florian Super League. However, the Sharks would leave to join the Micras Balkan Super League. Due to the failure of the Fastbet Cup and Fastbet Premiership, the league took control of the second tier and the new Super League 2 was launched and will kick off in 2019. The new competition allowed more new franchises into the Super League organisation. From 2021, the league will be expanded to 24 teams featuring teams from all states and territories of the Florian Republic. The expanded league will also split into two conferences of 12 teams.

In late March 2018, Some Florian clubs were angry with the administration of rugby league in the country and these clubs formed the Florian National Rugby League, a breakaway organisation which was deemed illegal by the Florian government. The organisation was later shut down. The conflict had a huge effect on all aspects of the Florian game, with many previously aligned Florian National Rugby League switching to Rugby Union and lack of money invested into grassroots rugby league.

The Super League (rugby league) consists of 18 teams: Three based in Northcliff, two in Blackoak, Dragonmoor and Havenbarrow. Other teams are from Birmingham, Meadowedge, Newhedge, Newmarsh, Northsilver, Stonehall,Oldhaven and Westlake. The league operates a promotion and relegation system with its feeder league, Florian Super League 2. In its inaugural season in 2017, only 12 teams competed in the league. After the 2017 season, it was announced that the league would be expanding to 16 teams and therefore the four highest placed teams in the Florian Championship were promoted. After having their license revoked, on the 14th December 2017 the Northcliff Broncos were expelled from the league and were replaced by KR Viten Sharks from Freeland, effectively creating an continental competition. KR Viten Sharks however would leave after one season to join the new Micras Balkans Super League.Northcliff Broncos would be then readmitted into the league. In 2018, the Birmingham Titans, Oldhaven Wolfpack and Southern Storm were granted Super League licenses.

The Super League (rugby league) is well known for the many rivalries it has in its leagues. The most famous are shown below:

The rivalry of these two Northcliff clubs has been described as the biggest and most violent rugby league derby on Micras. Both clubs are two of the biggest clubs in the country and both are currently dominant in the league. Northcliff Roosters are the better out of two due to them winning more titles than Northcliff Tigers. The rivalry is nicknamed the Immortal derby.

Preseason begins in January and ends in early February. In this time clubs play friendlies against other teams in the Florian Republic, however, some teams may play teams from other countries in the FMRL World Club Championships.

Rugby League is a summer sport in the Florian Republic and the regular season starts late March following a brief series of friendlies. 18 teams currently compete in the competition. A round of regular season matches is played every weekend for 29 weeks with irregular breaks to fit in Apollonian Challenge Cup matches, usually until the end of September. All matches are played on Saturday afternoons and evenings. Teams receive two competition points for a win. Teams on the table are ranked by competition points, then match points differential (for and against) and points percentage are used to separate teams with equal competition points. At the end of the regular season, the highest-ranked club after 29 rounds wins the Minor Premiership. The eight highest-ranked clubs at the end of the regular season advance to the postseason playoffs and the bottom three ranked teams are relegated to Florian Super League 2.

The league adopts the golden point rule during the regular season. Therefore, matches ending in draws after regulation time advance to extra time until a winner is decided by scoring a point.

In an attempt to expand the sport of rugby league, and market the Florian game to a global audience, the Super League (rugby league) has staged games in large stadia abroad in countries and domestic areas which traditionally don't play rugby league. The "Magic Weekend" concept, which involves staging an entire round of Super League in such a stadium, was first staged in Viten in 2017. 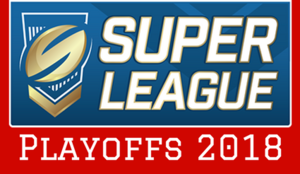 The eight highest placed teams at the end of the regular season compete in the Playoffs series. The system consists of a number of games between the top eight teams over four weeks in September, until only two teams remain. These two teams then contest the Grand Final, which is usually played on the first Sunday of October.

The Florian Super League Grand Final determines the season's overall champions and is the most popular sporting event in the Florian Republic. Since inception, it has been played at Northcliff Arena, the largest stadium in the republic. The Grand Final is always played on a Sunday and is televised on TV networks such as Red Sports, RLM24 and other TV channels. The game has an opening ceremony featuring entertainment and the singing of the national anthem as well as an invitational nines game. At the conclusion of the Grand Final, there is a presentation ceremony where the winning team are awarded champion medals and then the man of the match is given the Edwin Farrar Medal.

From the 2019 season, the Super League (rugby league) and Florian Super League 2 will operate a player draft. Players available for the draft would be from amateur clubs and university athletes. The combined clubs of 36 teams will have six rounds to pick one player. The worst-ranked team in the Florian Super League and Florian Super League 2 choose first and the champions of the previous season will choose last. Clubs are required to make their selection within a certain period of time, the exact time depending on which round the pick is made in. No draft was held in the 2020 and the event won't be hosted until 2022, by that time the six new expansion teams should have played a full season.

In the Florian Republic , the Super League (rugby league) has deals with two networks, Red Sports and FBC Sport. Collectively, these contracts cover every regular season and postseason game. In Freeland matches are broadcasted on PRF1 TV, its main TV channel. The Florian Super League is available to the rest of Micras via an official Livestream channel. Matches are also broadcasted in Mercury, Craitland, the Kingdom of Coria and Senya.

Matches on Sunday are currently are covered by FBC Sports.

Below, is a list of match officials currently officiating in the league, three of which are FMRL tier one officials:

Logo for the 'Bunker'. Sponsored by Chicken King

The Super League (rugby league) uses a two-referee system. In every match, there are two referees, two touch judges, video referee and a timekeeper.

The league was not sponsored in its first season.

As well as title sponsorship, the league has a number of official partners and suppliers, such Raptor (Offical ball supplier), Queens Press (Offical beverage), VykMotors (Official motor company) and N@G@ (Offical communications partner). Drag0n is to make the official game, Rugby League World. Florian Airlines is the official airline of the league and will provide travel to matches abroad in Etourney and other countries. On the 5th December, The eyecare company, Quicklenses became an official referee sponsor. After a long negotiation talk, fast food company Chicken King became the sponsor of the video referring system.