Stonehall Rhinos is a professional rugby league club based in Stonehall,Florian Republic. Founded in 2017, they compete in the Florian Super League, the top-level Apollonian rugby league club competition. They play their home matches at 'The Jungle' which has a capacity of 26,500.

Stonehall plays in traditional stonehall colours blue and amber (home). Their home kits are famously blue with an amber band around the chest and on the arms. 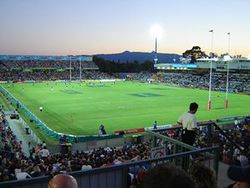 View of the Rhinos home ground, The 'Jungle' Stadium

Stonehall Rhinos ever since its formation has played at The 'Jungle', located in the east of the city. It has a capacity of 26,500.

Stonehall Rhinos's main rivals are the Blackoak Bulls and Blackoak Giants as these teams are near to each other. The derbies played between these teams are one of the most famous rivalries in the Florian Super League.

The Squad of Stonehall Rhinos is listed below: