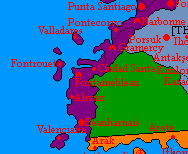 A map of the Southern Aldurian Riviera

The Southern Aldurian Riviera is the coastline facing the North Raynorian Sea in the southwestern corner of Alduria. There is no official boundary, but it is usually considered to extend as far north as Punta Santiago to all the way south, where Alduria shares a border with the Constancian settlement of Arak. The coast spans several Aldurian states, namely Biscarrose, Asuara, Napoleon, Valenciana, and Valladares.

This coastline saw the rapid development of the first modern resort areas in Alduria. It began first as a series of health resorts for the upper class. With the arrival of new roads, ferries, and railways that better connected it to the rest of the country, it became the playground and vacation spot of Constancian, Ransenari, and Natopian politicians and aristocrats. In early 1678, it began attracting artists, poets, writers, and musicians of note in Aldurian and Constancian society. Tourism tax revenues in 1678 demonstrated that the area has become a popular tourist destination and convention site. It is common for Aldurian celebrities and foreign aristocrats to have vacation homes in the region.

The Aldurian Riviera is also a known as a major yachting and cruising area with hundreds of marinas along its coasts.

Hotels and resorts of note