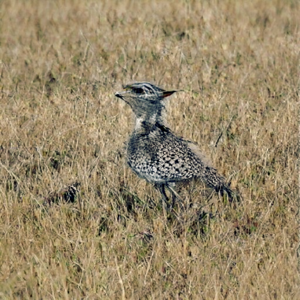 Regarded as one of the continent's top land-based predators, a pack of Siu-Illt-Nas is capable of taking down virtually any of Corum's large herbivores.

Capable of advanced forms of communication, members of this species are known to employ complex tactics when hunting. Undoubtedly the top land-based predators in Northern Corum—aside from humans—few creatures are able to withstand an attack by two or three Siu-Illt-Nas. Standing at around a meter tall, this bipedal creature uses its razor-sharp talons to disembowel prey, before biting into flesh with its razor-sharp teeth. Females of this species tend to be more red in color than males, which tend to feature three to four small backwards facing horns.

Found in only 6 out of 20 Pallisican cities in Corum, this species is common.

As pack hunters, Siu-Illt-Nas are known to employ the use of complex vocalizations in order to communicate with other members of their group, especially when hunting larger prey such as the Giid-Lisea-Eda or the Eeli-Illt-Eda. Researchers working for the New Zimian Space Exploration and Settlement Agency have documented at least a dozen of the Siu-Illt-Nas' distinct vocalizations. In the clip below, one hears a group of three Siu-Illt-Nas become excited at the sound of a nearby Giid-Lisea-Eda. Among the vocalizations heard in this clip, one hears the high pitched squeals of two subordinate members of a hunting party, and the loud, drawn out croaking sound of a hunting party leader. 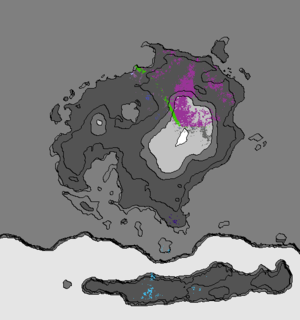 The range of the Siu-Illt-Nas extends across 11.15% of the landmass of Corum. The majority of the species' range - 64.83% - lies within the continent's Mediterranean climate regions, while almost 16% lies in the Temperate climate regions of Isani Sweep. That said, southern Corum is home to a number of remote populations of feathered Siu-Illt-Nas, which are far more aggressive than their generally featherless, northern counterparts.

The Siu-Illt-Nas is regarded as a highland creature, although its territory extends across the lowlands of Northern Corum. Populations of Siu-Illt-Nas have been documented in the Central Riponian Mountains.