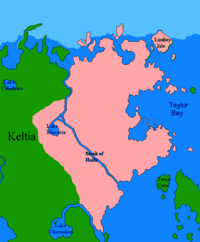 Sino-Keltian people are people who descend from a portion of Keltia's population.

The Sino-Keltian people are found primarily in eastern Keltia and first rose to prominence with the founding of the Federative Republic of Chine. Up to the formation of Chine, Keltia was dominated by two racial groups, Atterans and Caucasoid Keltians. Sino-Keltians formed a third and unique race. Early on Chine fought a bitter civil war between the democratic Federative Republic and the communist Soviet Republic. The civil war spurred a population explosion and mass migration of Sino-Keltians firstly across much of eastern Keltia and then to other areas of Micras.

Following the eventual collapse of both Chine and Attera, numerous other Sino-Keltian nations arose to fill the vacuum. Among these were Kampong, Xinguo, Taesong, Dipingxian, Shenzhou, and several others. Although many only existed for short periods, they nonetheless had an outpouring of culture that has often been referred to as the Sino-Keltian Golden Age. Once the golden age waned these nations and their cultures were largely displaced by other ethnic and racial groups.

Anthropologists theorize that Sino-Keltians migrated primarily in a western-moving pattern, suggesting that the origins of the Jing population on Apollonia originated from Keltia. Oral tradition on the island of Rulak also supports this theory. 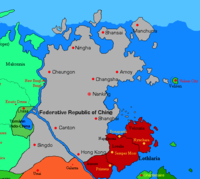 Chine at its height of power. 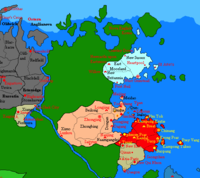 Nations of the Sino-Keltian Golden Age.
Retrieved from "https://micras.org/wiki/index.php?title=Sino-Keltians&oldid=136571"
Categories: