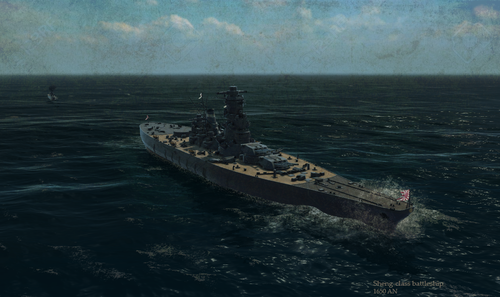 A Sheng cruiser at sea.

The Sheng-class (battle)cruiser was the first developed Jingdaoese battlecruiser since the start of the Xindao Program (New Path Program), which focused on a massive expansion of the Navy to counter the Shirerithian rearmament programme, that was itself a response to the ongoing Sxiro-Jingdaoese Confrontation over the loss of Kildare.

The Sheng is considered to be a departure from its predecessors in that the placement of armaments has been rationalised so that the gun-turrets no longer mutually obstruct their respective fields of fire, which had been something of a tradition hitherto in the Jingdaoese Navy.

The cruisers have stronger armor and heavier guns, so they are potentially more powerful at the cost of being more expensive, less manoeuvrable and more detectable. They may stand in the line of battle in the absence of battleships or battlecruisers.

Old photo of a Sheng cruiser.

Old photo of a Sheng cruiser.
Retrieved from "https://micras.org/wiki/index.php?title=Sheng-class_cruiser&oldid=129261"
Categories: