The Sanaman Antarctic Territory was established in 1675 after SanOil prospectors found large deposits of natural gas in the Antarctic. The first contigent of prospectors was transported from the naval base in Port Niyi on 10.X.1675 aboard the naval exploration ship FNSS Endeavour. The ship made port in Asara Eliana, The Two Martyrs, Natopia, on 24.X.1675.

Sanama, being a nation with vast oil deposits, gravitated naturally towards exploiting those resources. After the Kalirion Fracture, the federal government worked tirelessly to establish a viable economic base, since the area had been largely ignored under colonial rule. This rapid expansion, as well as several large construction and manufacturing efforts, skyrocketed the demand for resources and energy. Under vehement criticism from the Green Alliance in the Federal Assembly and the Federal Council, the government approved an expedition to the barren wastelands of the south. The newly commissioned scientific exploration ship FNSS Endeavour was chosen as the platform for the effort. Planners had also been inspired by the Verionist Great Southern Expedition. 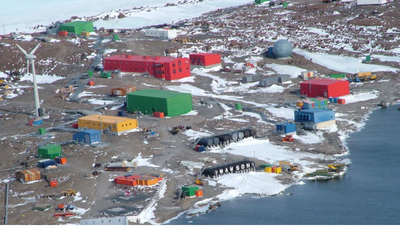 FNSS Endeavour left the naval base in Port Niyi on 10.X.1675 southbound. The journey was largely uneventful, but the regular scientific crew of the ship did take the opportunity to study the wind patterns of the equatorial region. The ship landed in Asara Eliana, The Two Martyrs, Natopia on 24.X.1675. There the ship restocked and was joined by a privately owned icebreaker for the journey through the permanent ice cap of the southern regions. On 6.XI.1675 the two ship reached their target outside the ruins of Lybelle. A number of hovercraft were launched from the Endeavour, and people landed on the island. Given the harsh climate, the first priority was to establish a viable settlement. The following days saw a flurry of activity from the Natopian mainland to the new base, and a settlement was quickly established, Anisa station. A landing strip for small aircraft was also established just outside the station. A port capable of receiving tankers and other ships is under construction.

Prospectors found large deposits of natural gas, as well as various metallic ores and smaller deposits of oil. Following this, the area was claimed for Sanama to facilitate controlled expansion. The army platoon that accompanied the expedition constructed barracks on the outskirts of the station. 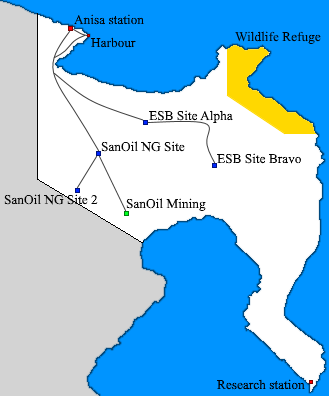 Sanama claimed the eastern parts of the Sypyr island. The first extraction concession was awarded to SanOil. A second extraction concession with a 50 percent ratio (the resources extracted split evenly between Sanama and the concessee) was awarded to ESB Cibola. A third concession was awarded shortly after to Sadri Industries' Sanaman branch. Transport contracts was awarded to the Woolridge Shipping Company and SATCo, which was also hired out of Two Martyrs for icebreaking. The harbour is located to the east of Anisa station and rudimentary roads have been built to the three SanOil sites and the ESB sites to the southeast. The research station to the extreme south is only accessible by band wagon.

A wildlife refuge has been created to the northeast to protect the habitats of penguins, seals and a small population of polar bears. This was also done in part as a concession to the Green Alliance. The territory enjoys a harsh antarctic climate with summer temperatures averaging around -1 Celsius and average winter temperatures around -37 Celsius.

The territory is governed as a federal territory under the direct authority of the federal government, which appoints a public servant as administrator. Since there is no permanent population, there is no elected body. The government welcomes private investment in the area and several concessions have been made. Federal law applies.