The Sanama national football team is the football team which represents the micronation of Sanama. It is a member of the WMFA, and is run by the SFF.

The team is the official successor of Sanilla and Amarra, and as such retains its records.

The team was founded in mid-2019 after the foundation of Sanama as the successor state to Sanilla and Amarra. Soon afterwards, the team competed as hosts in the inaugural Vulture Cup, topping their group with seven points before beating the Unified Governorates on penalties and losing to Elwynn to finish as runners-up.

In the following year's Benacia Cup qualifiers, the team topped their four-team group unbeaten with 16 points and qualified for a first ever finals. In the finals, the team performed well and advanced from their group in second with five points before overcoming Elwynn in the semi-finals and Craitland in the final, both on penalties, to become WMFA champions for the first time. 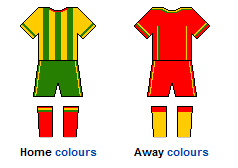 Sanama has used the following flag during the entirety of its FMF affiliation: