The current Royal Chancellor is Lord Montin, who has held the position since July 16, 2010, making him the longest-serving in Gotzborg's history. 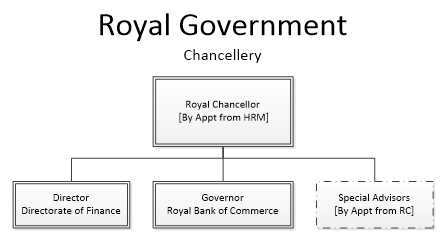 Organizational chart of the Gotzborg Royal Chancellery as of March 2013.

The Chancellery is the bureaucratic office that exists to assist the Royal Chancellor in performing and meeting his wide-range of responsibilities. It consists generally of a core group of Crown Servants as well as special advisors who are appointed from time-to-time to advise on specific policy areas in which they have expertise or strong interest. Current positions within the Chancellery are as follows: