Situated in the Great Valley along the Western Edge of the Inner Desert, the Realm of Bayen was originally a wealthy mercantile and agrarian society of Gamesman, who's capital city, Ossyo, once served as an important trade hub between the three realms major indigenous nations, the Bayanese, the Entuk, and the Kuzru. The Realm was annexed by Passio-Corum in 30.67 PSSC following the Gamesman Wars, which occurred as part of the generational wars waged amongst the native communities of Corum's Inner Desert. Today, the region is home to the headquarters of the Markets of Outer Corum, which is highly regarded for paying the highest wages of all companies featured on the Port of Vines. As such, the region is renowned for its agricultural output, which it owes to the existence of notable companies including Korhal Agricultural, and the Giid-Lisea Ranching Company.

A view of the foothills of Corum's Inner Desert, which extends into the Realm of Bayen.

The primary mode of transportation in the Realm of Bayen is rail. The region's railways are maintained by the Corumian Railway Corporation, which operates as part of the Pallisican Central Stock Fund. The region is also connected by an ancient system of roadways, originally constructed prior to the establishment of the Kingdom of New Zimia.

The Realm of Bayen is home to Fort Pallisico, the third largest of the Bassarid military bases found in Corum, and Fort Bijeko, which was established in the 39th era PSSC in an effort to exert greater control over central Corum.

The largest protected area in the Realm of Bayen is Lake Norton, the vast land-locked sea located in central Corum which conceals the primary entrance to The Corumian Underground. The region is also home to the Pach Monastery, one of a handful of monasteries operated by the New Zimian Temple Authority. Located along the mountainous far eastern border of the Realm of Bayen, the Pach Monastery sits at a higher elevation than any other Bassarid settlement in Corum. The site is therefore a popular destination for Pallisicans embarking on religious pilgrimages. 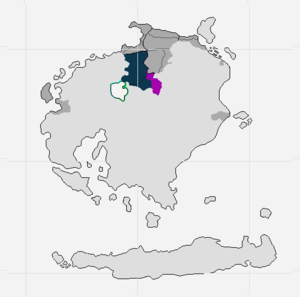 Lyvian Culture, which originated among the mystical Afrikaanian and Haifan followers of Madame Lye, the Pallisican cult priestess who served as advisor and lover of Queen Mina I, King Lucien IV, and Queen Evahn I, is the second most prominent of the New Zimian cultures. Members of this culture, who are known for their strange, mystical practices and belief systems, are regarded as being distrustful towards outsiders, but highly loyal within their communities. Many of the great Pallisican spies and religious leaders have arisen from this culture.

Ossyani Culture is the primary culture of the Bayanese Gamesmen who live in the Realm of Bayen. The core aspects of this culture dates back to Corumian pre-history, though in modern times it has assimilated many aspects of Pallisican culture. Traditionally, Ossyani culture was defined by a communal nomadic lifestyle in which communities wandered the region raising herds of Giid-Lisea-Eda and Eeli-Illt-Eda. Under the influence of Pallisican culture, Bayanese culture shifted away from its nomadic roots, towards a more urban and sedentary lifestyle, defined by a strict emphasis on trade and governance. With that said, members of the Ossyani culture are regarded for their fundamental industriousness, as well as for their close connection to, and knowledge of, the natural environment of northern and central Corum.

Alindan Culture, which is heavily influenced by the legacy of Babkhan settlement in Corum, is the primary culture of the inhabitants of the western shores of Lake Norton, in central Corum. The members of this culture have historically maintained a lifestyle which is distinct and separate from that of their neighbors, although this has changed in recent years as a result of the expansion of Corum Electric into the region. Today, the people who comprise this culture continue to live relatively isolated lives, retaining many of the customs which are emblematic of their ancestral ties to Eura, while quietly enjoying the benefits provided to them through trade connections with New Zimia.

Aijiac Culture first originated along the northwestern shore of Lake Norton in the period of Corumian pre-history. This culture is defined by a lifestyle which is heavily dependent upon the migration patterns of the giant, predatory wasp known as the Aiji-Hial-Nas. Members of this culture have long been sustained by the Aiji-Hial-Nas, which they hunt in great numbers in order to access the highly nutritious, partially digested fish pulp which can be found in its intestines. Today the members of this culture earn their living by selling this fish pulp to Bassarid consumers, who regard the meat as a very fine delicacy.

The Entuk and Kuzru Cultures are the primary cultures of the Gamesman Tribes known as the Entuk and the Kuzru. These two tribes were once two of northern Corum's most powerful and influential communities, and the most important allies and trade partners of the Ossyani, or Bayanese people. With the establishment and gradual expansion of New Zimia, however, their power and influence has waned such that they now play a marginal role in the region. The members of these two cultures maintain a high level of animosity towards the Pallisican peoples, and towards their former allies in the Realm of Bayen, who rejected them in favor of closer ties to Passio-Corum. This animosity has resulted in the outbreak of several minor, regional wars since the establishment of the Kingdom of New Zimia.

Merchant Braxian Culture is the primary culture of the Braxian people who emerge from the waters of Lake Norton in order to buy and sell wares from Bassarid and Gamesmen traders. This culture played a pivotal role in the establishment of relations between the Corumian Underground and the Haifo-Pallisican Imperial Trade Union which would, in 36.85 PSSC, allow the Bassarids to annex the lands surrounding Lake Norton.