Senya has an extensive railway network which serves the vast majority of settlements in the country. Unlike other nations, where automobiles are more popular, the Senyan government has for the most part invested heavily in the nation's rail network, ensuring that is the most reliable and convenient mode of transport.

The entire network is ran by Senyan Rail, who operate the vast majority of freight and passenger services across the country under various brand identities. The network is largely electrified and has connections to Jingdao and Natopia. 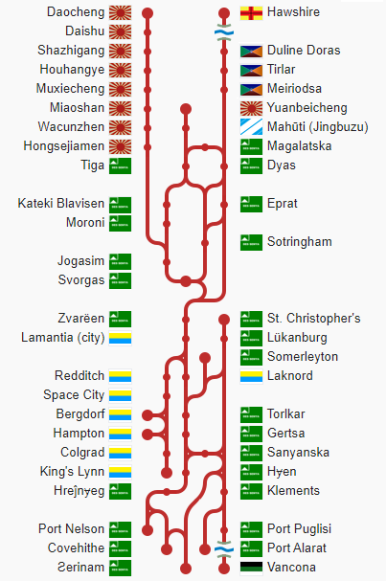 Map of Senyan's mainline network as of June 2020. Note: Only high speed main lines and major stations are depicted.

All rail infrastructure in Senya is owned by the state owned company Senyan Rail, who are responsible for the maintenance of the network. Senyan Rail additionally control all the various passenger and freight companies that operate on Senyan territory, with the exception for foreign companies from border countries running services into Senya.

The network runs entirely on standard gauge (1,435 mm, 4 ft 8 1⁄2 in) rails, with the vast majority of lines having overhead electric wires.

The rail network in Senya is highly developed, running even to many small villages. The backbone of the rail network are several connected high speed lines with run across the country, with regional trains branching off from this central spine out to more remote locations. Furthermore, rail transport in urban and suburban areas is excellent, with most commuters in even the smaller cities taking the train to and from work. The train system remains highly reliable, with 98% of trains running arriving before a 5 minute delay, with rail companies legally required to provide free travel to any travellers delayed by more than 30 minutes.

The Senyan network currently contains connections to both Arboria on the Dyas–Meiridosa line, and to Jingdao on both the Tiga–Mahūti and Jogasim–Hongsejiamen lines. Currently, intermediate border stations where trains stop where customs and immigration officials inspect goods and check passports. Services exist connecting Svorgas to Meiridosa and Tirlar in Arboria, with the Jingbuzu line supporting services to the Jingdaoese port city of Yuanbeicheng (Port Nevermore) and the Hongsejiamen line supporting long distance services to Daocheng via some coastal cities in southern Dalmacija. Most commercial services along these lines are run by Senyan Rail. An extension of the Svorgas–Tirlar route to Duline Doras and Hawshire was completed in 1686 AN, with trains now running from Hawshire to Svorgas directly, though most services only extend as far as Tirlar. A rail tunnel from Tirlar to Kezan was built in 1686 and opened the following year, allowing for the potential of direct services between Senya and the island of Kezan.

A rail container terminal is also under construction in Jogasim as part of Jingdao's White Tea Road project. The terminal will allow for goods heading to and from Jingdao to be stored and loaded. Whilst the terminal will be run by the Jingdaoese government, it is subject to checks by Senyan customs officials.

All trains that operate within Senya are assigned a fifteen-character service code so as to identify the service. Trains are assigned a string of numbers, which feature on passenger's tickets as well as the main rail switchboards and on information and timetable displays at stations.

The way the code is displayed can vary depending on the situation and what information is required to be relayed. The full fifteen digit code is only used by the track operators, where as the thirteen digit code is used publicly by the rail providers to show their route. However, shorter codes are also regularly displayed.

The following table uses the example of a 3pm express train from Svorgas to Eprat to exemplify how a service may be displayed.