Difference between revisions of "Punta Santiago"

Punta Santiago is considered the political, cultural, financial, and commercial center of Alduria. Jurisdictionally, the metropolis extends beyond the limits of the Aldurian Capital District mainly within the state of Asuara to the south, and to the west, within the state of Mondego.

Punta Santiago was founded originally as a small port in the then-Kingdom of Babkha called Al-Santyaghu in 1485 AN. Throughout its history it endured the first collapse of Babkha, Ashkenatzi colonization, and later colonization by Leon-Venezia. It was not until the collapse of Alexandria and later Caputia that hundreds of thousands of stateless settlers and developers from both nations came to settle, develop, and populate the city of Punta Santiago as we know it today. Several historical buildings are in Punta Santiago; among the most notable are the city's former defensive forts like the Citadel. Other notable buildings include the Sacre-Coeur Cathedral, the Executive Mansion, the Government Mansion, and the prestigious Hotel du Babkha.

The oldest part of the city, known as the Alcazaba, mostly features the influence of Babkhi, Ashkenatzi, and Martino architecture. This part of the city is comprised of a network of "setted" roads usually surrounded by ancient, two to four-storied houses built on masonry. Some colonial structures have been restored and serve either as government offices, museums, and short-term vacation rentals. Punta Santiago also features several public squares and is also notable for being partly enclosed by ancient massive walls and fortifications built by earlier settlers and colonists to safeguard the city. The architecture is more varied in other districts of the city. The Campos Business District has rapidly developed since Aldurian independence, featuring a lot of influence from art deco and other modern designs.

Punta Santiago is also one of the two Treaty Ports established in a treaty with Jingdao. Thanks to its status as a treaty port, it is home to a large Jingdaoese community, mainly ranging from merchants, clergy, and clerks with their families. It is home to the largest Catodral built in honor of the Heavenly Light on the Euran continent. Since Alduria's accession to the Raspur Pact in 1681 AN, trade with Jingdao has diminished while remaining one of the most important sources of economic activity in the city.

Coat of arms and flag 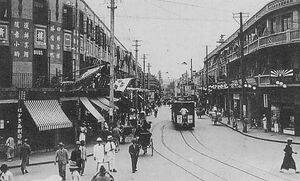 Some streets in Punta Santiago were heavily influenced by Jingdaoese architecture.