Protectorate of the Wallis Islands

A view of the Wallis Islands, at a time before the region's heavy settlement.

Originally established as a member-state of the Free State of Haifa, the Protectorate of the Wallis Islands was formally annexed by Passio-Corum after the islands declared independence from Haifa in 29.37 PSSC. The Protectorate, to this end, represents the oldest modern settlement anywhere in Corum. Today, the Protectorate - with a population of more than 5.6 million people - is the most densely populated metropolitan area in the Haifo-Pallisican Imperial Trade Union.

The primary mode of transportation in the Protectorate of the Wallis Islands is sail. Most permanent residents of the Wallis Islands own at least one personal sailing craft, which they use to navigate around the Wallis Archipelago at ease. Those who do not own such a craft are able to rent one from any number of private lenders, or to travel around the islands via ferry. The region's wealthiest permanent residents are known to travel around the region by helicopter.

There is no permanent military installation in the Wallis Islands, though the waters surrounding the archipelago are heavily patrolled by local law enforcement, and by forces representing the New Zimian War League.

The only officially recognized protected area in the Wallis Islands is Erlo Sinders Regional Forest. Although the forest is geographically separate from the Wallis Archipelago, it nevertheless is maintained by the government of the Wallis Islands. In addition to the remarkable biodiversity which it houses, Erlo Sinders Regional Forest is also the home of Duchess Esper, who moved to the region following her abdication from the position of Crown of Passio-Corum. 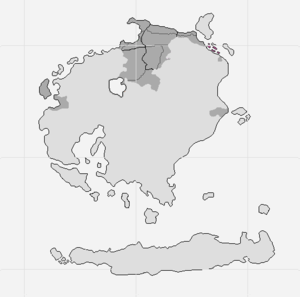 Sindersiac Culture is the primary culture found in the highly urbanized, cosmopolitan Wallis Islands Archipelago, in northeastern Corum. This culture, which first developed among the Haifan settlers who settled the region under the leadership of Erlo Sinders, is the oldest Haifo-Pallisican - or Bassarid - culture in Corum. Today the culture is known for its strict emphasis on material gain, the pursuit of prosperity, and in the opinion of many outsiders, a level of decadence and spiritual depravity. Members of the culture reject this view regarding their decadence, and instead view themselves as representing the very pinnacle of society.