Patti's is the largest fast-food chain in Alduria with over 800 restaurants employing around 128,177 people. Founded in 1672 by restauranteurs Dimas Martin and Anne-Marie Blackbourne, it offers takeaway, dine-in, and drive-thru options for customers with a menu consisting primarily of hamburgers, fries, breakfast items, and beverages. Patti's is one of the largest employers of 16-24-year-olds in Alduria. It is now owned by Martin-Blackbourne Enterprises, headquartered in the city of Pontecorvo, Alduria.

The Patti's brand was established in 1672 by brothers-in-law and restauranteurs Dimas Martin and Anne-Marie Blackbourne. It was named for Anne-Marie's sister and Martin's wife, Patti Blackbourne. The first location was opened in the city of Punta Santiago to serve the NABC Television Studios which had opened the previous year. The restaurant was a huge success, soon plans developed to open locations in Pontecorvo, Amapola, Beauharnais, Fort Laons, and Rothborne.

By 1679, the Times of Alduria reported that the chain had 268 units all over Alduria. After Blackbourne’s death in 1679, Martin-Blackbourne Enterprises was created, which had ownership of almost all 268 restaurants. Franchises are now being offered for low commission fees to encourage the rapid expansion of the company over the next three years. Efforts to take the brand to foreign countries have been proposed in 1677 and 1678. The first overseas locations will open in Ransenar, in the cities of Goldfield, Goldshire Hamlet, Wendor, and Airle in late 1680.

Overseas expansion continued in 1685 when Kerularios & Company awarded the contract for onsite catering for its facilities in the commercial container port of Rothaven in the UGB to Patti's. In addition to operating staff canteens Patti's was also granted concessions for franchised fast food stalls accessible to locally hired dockworkers. 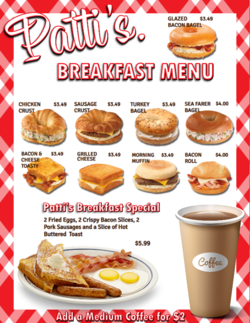 Patti's menu consists primarily of hamburgers served with fries and salad. Products include Beef Burgers, Cheeseburgers, Bacon Cheeseburgers, and a signature Patti Burger which consists of a quarter-pound beef patty, two slices of crispy bacon, cheese, and hash browns. All burgers can be customized from an "Extras" menu with available additions including; onion rings, extra cheese, hash browns, extra pickles, sausage patties, and deep-fried mushroom slices. Until 1677, Patti's served a chicken burger consisting of a deep-fried chicken fillet, mayonnaise, lettuce and deep-fried bacon bits marketed as the Chicken Feast. Public demand saw the item return to the menu in 1679.

Patti's has faced criticism in recent years for the high calorific value of its products. It's signature breakfast sandwich, the Glazed Bacon Bagel, consists of a glazed doughnut filled with deep-fried bacon and cheese which contains over 1,000 calories per serving. Its portion sizes have increased over the last three years with a Patti Burger now representing 1,950 calories for the sandwich alone.

In 1678, Patti's announced that it would increase its range of salads, fruits, grilled meat, and reduced portion sizes for children. It also removed cartoon mascots and stopped running advertisements during children's television show broadcasts in Alduria.

In 1679, Patti's announced that it would no longer use beef dripping in the preparation of its food and would instead use sunflower or peanut oil. This was welcomed by obesity pressure groups, but criticism followed when Patti's announced the introduction of a customer loyalty scheme whereby customers can receive a free Glazed Bacon Bagel for every 6 meals purchased at a Patti's restaurant. Healthy eating lobbyists suggested that this was a tool to make adults dependent on Patti's and that it encouraged over-eating. Patti's maintains that it has a healthy range of foods available to customers and simply wished to build a closer relationship with its patrons.