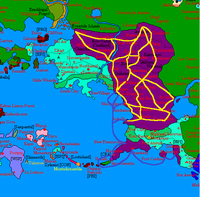 The Pan-Keltian Highway is a transportation megaproject being built by the government of Alduria-Wechua to build a series of highways on its Keltian territory to better connect the Alduro-Wechua regions of the Wechua Nation, Santander, and Valencia. The highways also aimed to better connect the new capital city, Cárdenas, with the rest of the country. The project also repairs, expands, and modernizes the existing system of roads in the Wechua Nation, called the Qhapaq Ñan.

The project shall also include the "Keltian Marine Highway", a ferry service to connect Santander and Valencia over water. The marine component of the highway shall be operated by KelMAR, a joint-venture by the federal government and Kerularios & Company. The project is part of the New Prosperity Plan. The highway will be designed in similarity with the Pan-Euran Highway.

The project has been designed to enable the connection of the entire highway to other Keltian nations, in hopes of better connecting the country with the rest of the continent. To date, no plans to connect the highway project with Keltian neighbors have been announced. The route traverses the mountainous central Wechua regions and the Rodinia river, which pose formidable engineering challenges. The highway will be fitted with sophisticated electronic surveillance measures and advanced vehicle collision absorption measures.