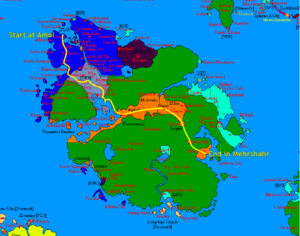 A map of the proposed Pan-Euran Highway, starting in Amol, Alduria and ending in Mehrshahr, Raspur.

The Pan-Euran Highway is a megaproject in the Euran continent that aims to a build a series of highways, railways, and supporting roads to link the nations of Alduria-Wechua, Antakia, Constancia, Raspur, and the Suren Confederacy.

The Pan-Euran Highway will pass through many diverse climates and ecological types, ranging from dense jungles to arid deserts. This has offered plenty of political, engineering, and environmental challenges to the consortium of Euran nations in its design and construction, with the likelihood of some areas being fully passable only during certain seasons.

The project was initially conceived by the government of Aldurian Prime Minister Kylian Mbappé as part of a wide-ranging national infrastructure agenda in 1685 AN, following the economic instability from the assassination of Marco Zimmer. Diplomatic talks were initiated in Punta Santiago early in 1685 AN by Mbappé. After the coup, the interim Government continued the talks as it worked to establish a new federation with the Wechua Nation through the Committee for Alduro-Wechu Integration. When Alduria united in a federation with the Wechua Nation later that same year, the plan was picked up as one of the very first projects by the newly established federal government and its New Prosperity Plan.

The new federal government is currently pursuing the project and making arrangements diplomatically to begin construction of the highway in late 1687 AN.

The Constancian section of the Pan-Euran Highway is managed and overseen by the Ministry for Reconstruction and Infrastructure of the Imperial Constancian Government.

The Raspurid section of the Pan-Euran Highway is managed by government of the Khanate of Raspur and overseen and funded by the Ministry for Reconstruction and Infrastructure of the Imperial Constancian Government.