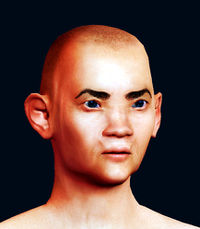 A portrait of a Pallisican male.

The Pallisican peoples are the descendants of the offspring of the indigenous Kralian people of the modern region of Passas and the settlers from Lovely who arrived in Southwestern Keltia in the 300's WG.

The primary contribution of the Pallisican people to the global community is the essay "A Sustainable Economy". Written by Opyeme Time, this essay provides an overview of what is today the largest and most developed of Micras' various economic systems. The ideas expressed in Time's essay are widely practiced in Passio-Corum, and between the nations which represent the USSO.

Given their Kralian ancestry, the Pallisican people are in some circles, in particular in nations such as Shireroth and even more dramatically Natopia, counted among the various non-human races of the world. In the early 36.70's this idea came to the forefront when Natopian leadership maliciously and hatefully described the Pallisican people as "pug-nosed sub-human animals...a corruption that has infected humanity and which, like diseased flesh from a sickly body, must be excised with the surgeon's scalpel." This idea is apparently re-enforced by the Pallisican proclivity towards cannibalism. With that said, the idea that Pallisicans are not human is also upheld within the teachings of the Pallisican Religion's Humble Paths, which maintain that Pallisicans, whose ancestors include humans from the former Kingdom of Lovely and the indigenous and semi-divine Micrasian inhabitants of southwest Keltia, are in fact super-human, superior in most aspects to the peoples of other nations. In support of this premise, followers of the practitioners of the Humble Paths point to the economic, political, and social influence which the Pallisican nation exerts over most parts of the world.