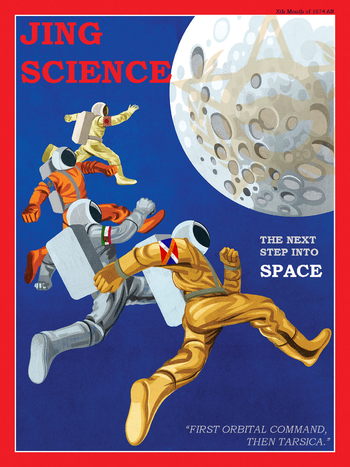 Jing Science reports about the space mission of the Union towards Tarsica, with the Orbital Command as first step.

The Orbital Command is the first space station of Common Cosmos Colonization Coalition, the organisation uniting all space agencies of the members of the Union of States around the Sovereign Oceans. Several member states had experience with sending unmanned, and manned, expeditions into space prior to the project, but in 1674 AN, the know how and manpower was combined to establish a more permanent base into space.

The main goals of the space station is - next to the necessary propaganda value - to serve as space an environment research laboratory in which its crew members were to conduct experiments in biology, physics, astronomy, meteorology and to research living conditions for humans and other species in limited spaces. The Jingdaoese experiment to test the reactions and living habbits of safir lifestock upon entering space was pushed back to a later date.

The following table shows the current crew of the Orbital Command: