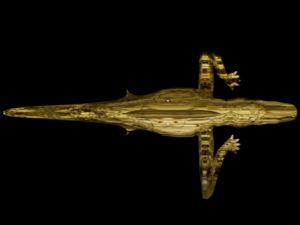 The Olgi-Etvoy-Irf is an opportunistic ambush predator, which has sometimes been known to attack humans.

Lacking in powerful fins, the Olgi-Etvoy-Irf is known to sit stationary on the ocean bottom for days or weeks at a time, occasionally using its unusual, long front limbs to power itself as it leaps, rather than swims, from place to place.

Found in 3 out of 20 Pallisican cities in Corum, this species is uncommon. 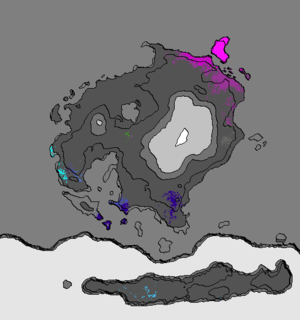 The range of the Tuhi-Etvoy-Nas extends across 13.18% of the landmass of Corum. Less than half of the species' range - around 44% - lies in the warm Mediterranean regions of northern Corum, while in contrast, around 35% of the Olgi-Etvoy's range lies in the polar regions of southern Corum, such as West Chamburr and the Greater Gudrun Polars. Populations of Olgi-Etvoy can also be found in the coastal portions of the Northern Isani Sweeps, in the southern reaches of the Plains of Brugge, in western Corum, and in portions of western Hypernostria.

The Olgi-Etvoy-Irf is almost exclusively found in Corum's lowland regions. Only around 2.8% of the species' range is believed to extend into any highland regions.