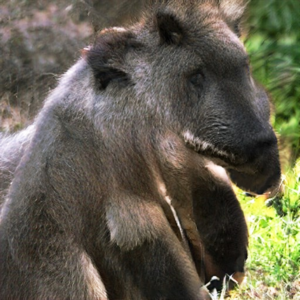 The Oble-Lisea is a large and powerful creature which is known to be very territorial. Using its short trunk it can smell out potential trespassers from miles away. 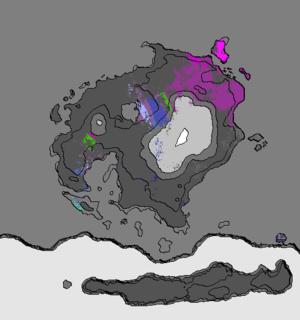 The Oble-Lisea-Eda can be most commonly found in the temperate northeastern reaches of the Riponian Mountains, though the species is also present in the frozen wastes of southern Corum.
Temperate 2
Temperate 5
Temperate 6
Continental 1
Continental 2
Continental 3
Continental 4
Polar 2

A large and powerful creature, the Oble-Lisea-Eda is known to live its entire life in communities of ten to eight members. Capable of growing to heights of around three meters, and weighing up a ton, this creature uses its two long arms to reach the fruit at the tops of tall trees in the non-coastal regions of Northern Corum. Featuring a unique, short trunk, the Oble-Lesia-Eda is known to possess a very keen sense of smell, which it uses to sniff out rich, abundant groves and orchards. Despite its tranquil, noble appearance, the Oble-Lisea-Eda is very territorial. Humans have been known to be attacked, and even killed, upon accidentally, or purposely straying into the territory of this creature.

Found in only 4 out of 20 Pallisican cities in Corum, this species is uncommon.