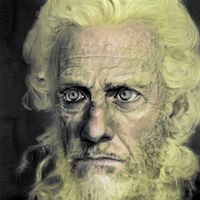 A portrait of a Normarkian male.

The Normarkian people, otherwise known as Normarians, are a community of native inhabitants of the region of Normark who around the turn of the 37th era PSSC converted to the Stripping Path. Closely related to, and highly influenced by their converted cousins in the city of Vaeringheim, Normarkians played a central role in the Strait of Haifa Campaign, supporting Bassarid efforts. As a result of their support for Bassarid forces during the Strait of Haifa Campaign, some Normarkians were - beginning in 36.81 PSSC - forcefully removed from their homes in the region surrounding the Gulf of Jangsong, and enslaved in the iron mines of Leng. The enslavement of these people gave rise to the Normarian, or Ironist culture which is now predominate across western Leng.