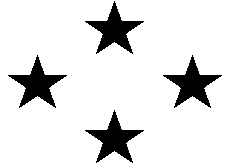 The Four Stars of Norfolk are a recurring symbol originating in ancient times. They are the national symbol of Los Liberados.

The Norfolk Isles (martino: Islas de la Gente del Norte) is a group of island to the South of the continent of Apollonia. Norfolk has in the past been part of Shireroth, Tymaria and Jingdao. Today, the Southern part of the islands is home to the Republic of Los Liberados.

Norfolkian culture is characterised by its love for maritime endeavours, and a libertarian outlook on life. It is therefore not surprising that the islands have been home to various groups of seafarers, from pirates to the Iron Company.