Nikolaj was assasinated on 21 October 2017 during his visit of Astaronian administrative capital of Nizbejn, where he received a sniper shot in the head while entering the Regional parliament building of Astaronia. The assassin, who was later identified as Florian-backed, was caught after a short chase. After almost a month-long interrogation which included torturing, he was sentencted to death on 16 November. His beheading took place on the same day in front of Corian palace and was attended by more than 100,000 people. 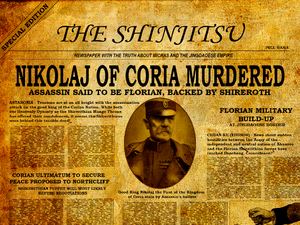 One of the major Jingdaoese newspapers, Shinjitsu, covered the turbulent happenings in Coria.