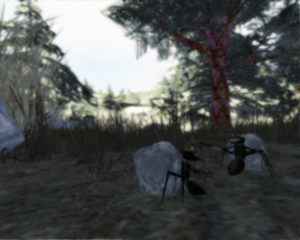 Pictured: While groups of roving Niha-Hial-Nas are not uncommon in the highlands of central Corum, it is often difficult to identify them due to their remarkable ability to disguise themselves as normal boulders. 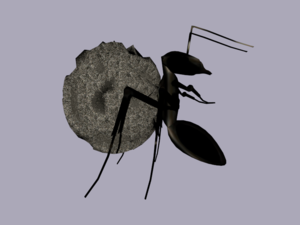 The rock-like protrusions which feature on the back on the Niha-Hial-Nas provide very effective camouflage as it sleeps during the day.

Common in the non-coastal regions of southern and central Corum, the Niha-Hial-Nas features protrusions on its back which resemble very hard rocks. Nocturnal in nature, this creature spends its days sleeping safely on its belly, with its legs tucked underneath it. To most casual observers, there is no visual difference between a sleeping Niha-Hial-Nas and any other of the boulders which dot the landscape.

Found in only 2 out of 20 Pallisican cities in Corum, this species is uncommon. 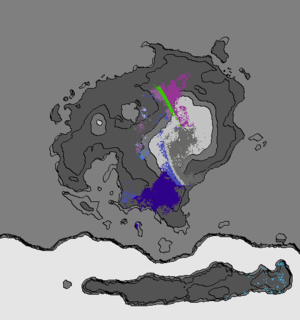 While the Giid-Lisea-Eda prefers the Mediterranean climates of northern Corum, the species can also be found in the frozen, polar regions of Hypernostria
Mediterranean Climate
Temperate Climate
Continental Climate
Sub-Arctic Climate
Polar Climate

The range of the Niha-Hial-Nas extends across 23.17% of the landmass of Corum. Around 43% of the species' range lies in the Sub-Arctic regions to the south of the Riponian Highlands, while 25.43% occupies the continental climate regions which extend from the Central Riponian Mountains southwards. In contrast to many other notable species on Corum, the Niha-Hial-Nas is relatively uncommon in the continent's warm northern regions - only around 23% of the species' range occupies the Mediterranean climate region which is constituted by the Kingdom of New Zimia and the Realm of Bayen. With that said, 8.24% of the species' range lies in the temperate region known as the Northern Isani Sweeps, while 2.3% occupies the polar regions of Hypernostria.

The Niha-Hial-Nas is a highland species. Most of the Niha's habitat lies within the immedate vicinity of the Central Riponian Highlands.