Natopia, (Natspeak: vџV:*_џ /nʌ:toʊpiə/ nuh-TOE-pee-ə), officially the Bovic Empire of the Natopian Nation, is a forum-based micronation with primary territorial holdings on the continent of Tapfer, on Micras. It has occupied the large island known as Tapfer Minor or Yellow Island, for all of its existence. On Tapfer, Natopia has a fortified border with Stormark; on Cibola Natopia has a land border with Craitland and Goetia and a sea border with Helderbourgh; on Apollonia Natopia has borders with Jingdao, Senya, and Gotzborg, and a sea border with Shireroth; on Benacia Natopia shares a sea border with Sathrati; on Corum Natopia's EEZ borders the Haifo-Pallisican Imperial Trade Union. Athlon, the seat of the Dozan Bovic Church, is a protected sovereign nation within Natopia's internationally recognized jurisdiction. Natopia is a unitary parliamentary constitutional monarchy. The Emperor directs foreign policy, serves as commander-in-chief of the military, and performs ceremonial and diplomatic duties in their role as head of state. Legislative authority is exercised by the Frenzy presided over by a Chancellor with executive prerogatives. The emperor and several appointed judges serve as a supreme judicial and constitutional court. The demesnes of Natopia have local autonomy but are bound to national laws.

Natopia's foreign affairs are formally handled by the Natopian emperor, although in practice they are carried out by the Court of the Calm Waters. Natopia's foreign policy is centered around support of its close and long-term allies, securing trade deals, supporting human (or non-human sentient lifeforms) rights, containment of rogue nations, interpersonal alliances developed by the House of Waffel-Paine, supporting the mission of the Micras Treaty Organization, and supporting the Raspur Pact. 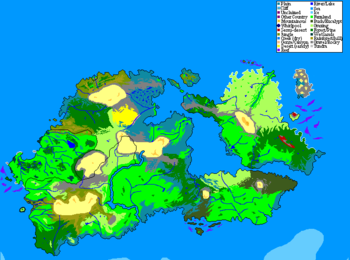 On Yellow Island, the original and oldest part of the nation, the subdivisions of Ziegeland, Hazelwood, Alrodey, and Tas Neemia are part of Flaventia. Lindstrom, the capital of the Empire, Lindstrom is also located on Yellow Island but is its own special administrative area.