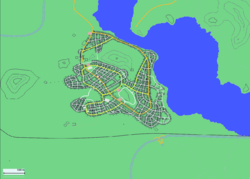 Located on the remote western shores of the Strait of Haifa, the city of Mylecia was established during the golden age of settlement in Keltia, by the Republic of Riverstone. Following the collapse of Riverstone in 26.50 PSSC, and the subsequent abandonment of its settlements, the city of Mylecia was claimed by a population of indigenous gnomes, who used the location as the headquarters for operations involving the construction of a vast system of coal mines to the west of the city. A century after laying claim to the city, the gnomes too were driven away, this time by Haifan entrepreneurs who ventured to the region in hopes that the gnomish coal mines may provide the spark to rebuild their nations depleted economy. Though the output of the mines was insufficient in this regard, it would prove adequate to foster trade between Mylecia, Jogi, and Blore Heath, the cities which would eventually constitute the Maritime Markets of the Strait of Haifa.

Since the establishment of the Maritime Markets, Mylecia has become an epicenter of commerce in central Keltia. Today, the city is home to many companies, many of which represents one of the various cults of Dionysus, not least of them the Bacchian Vine Fleet, a cult of pirates who sail upon ships crafted from living vegetation, and the Grand Cave Bee Meadery, a company which produces high quality mead using the honey produced by bees inhabiting a vast underground colony. 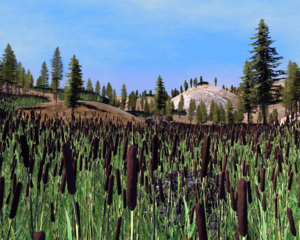 A view of the coal-rich hills which rise to the West of Mylecia.

The primary mode of transportation in Mylecia is sail. The city of Mylecia is, with this said, also connected to a complex network of highways.

While there are no official military installations located in Blore Heath, the city is defended by the New Zimian War League, and by the Jogi Regiment. The city is also defended by the Bacchian Vine Fleet and the Knights of Mt.Nysa.

The only officially protected area in Mylecia is the Temple of Agripinilla.