The Republic of Mania (Respubliko Mania) was declared independent by its only citizen, Manny Neira, on the 3rd of February 2006.

It's territory is defined as 'that part of the earth's surface closer to me than to anybody else at any given time', Neira claiming sovereignty over this region on the grounds of being its majority population, and in line with the principle recognised by such diverse authorities as F D Roosevelt, the UN Charter, and V I Lenin of "the right of peoples to self-determination". 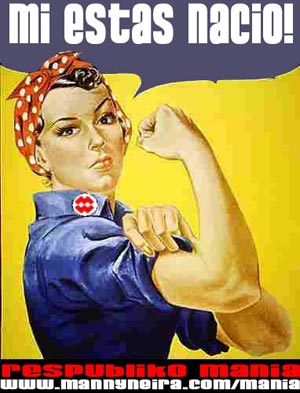 It's official language is Esperanto, though as the founder doesn't speak this language only the most important phrases have been translated into it, such as the country's name (Respubliko Mania) and motto (Cxiu homo estas nacio - Every human is a nation).

This motto reveals the real spirit behind the one-man Republic, which is to stand as a creative satire on 'the system of world apartheid known as states'. His personal site includes the national website of Mania, and an essay titled "Imagine..." presenting the argument for the abolition of states, and uncompromising internationalism, in plain form.

The Republic's website is quite extensive, and explains all the symbols of Mania's statehood: from its constitution, through its name, flag, anthem, and territory, to its currency (the 'eblo') and postal services, written in a richly illustrated mixture of humour and political argument.

Also of interest to the micronationalist may be the website of the 'Ministry of Undisclosable Purpose', a part of the government of the huge micronation of Ladonia, created by artist Lars Vilks, and where Neira serves in cabinet. The ministry is a satire on the world's security and intelligence services in particular, and the encroachment on human rights done in the name of the 'war on terror' in general.