Lusa (English: Lucerne) is a Mercurian dependency, consisting of a small island situated off the northern coast of North Antarctica.

The dependency of Lusa was settled in mid-2012 by Mercurian traders setting up trading links with North Antarctica.

Lusa elects a 40 member Fono le Lusa, which sends two members, a Governor and Deputy Governor, to the Mercury Parliament. These members sit as Independents in the House, and usually only vote on affairs directly affecting Lusa.

The island is located off the northern coast of North Antarctica, inside the southern permanent ice sheet. The city of Lusa'aii is located towards the north of the island. Three other small towns are in the south, Samiaii, Uliuli and Vai. 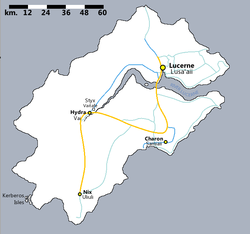 A map of Lucerne.

The main scientific centre on the island is the observatory at Uliuli, an outpost of the University of Mercury. The observatory studies the Aurora Australis, frequently observed in the area, and most of the southern skies, unseen from Mercury.

Lusa's main connection to North Antarctica is a hovercraft service, which in Lusana is called Fapefai le Samiaii. This service runs once an hour between Samiaii and Livingston. There are also two daily flights between the A'ialufo le Lusa and Livingston. The main road on the island is the L1, which links all four major settlements on the island.

Sport is a major part of Lusa's culture, with the island being home to the national football, rugby league and ólbescból teams. The island has six football clubs, which compete in the Lega ona FLV.