The Elwynnese people have no majority language. Rather, different languages are dominant in different areas. Elwynnese law commands that any government division where more than 20% of the population speak a given language, that language shall be an official language of that division. A division is allowed to bring any other language to official status too. Istvanistani is a general working language throughout the entire Republic. Other official languages of the Republic are Elw, Babkhi and Norse. 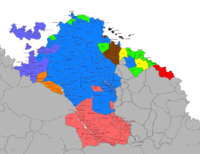 Largest language per bailiwick. See image for legend. (Leng and Raikoth not shown). 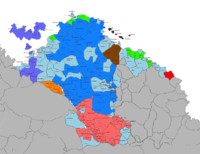 Majority language per bailiwick. See image for legend. (Leng and Raikoth not shown).

Proportion of native language in Elwynn, the Congressional Counties (CC), the Alalehzamini Autonomous Republic (AAR), and the Northern Commonwealth, in 1676:

Proportion of native Elw speakers per bailiwick. (Leng and Raikoth not shown).

The Elw language is the historically aboriginal language of Elwynn. It is an agglutinating language of several dialects, of which Caligaean, Utasian, Alalehzamini and Iserdian are the largest. The written standard uses the Cyrillic alphabet (historically a syllabic script) and is based on the Caligaean dialect with large influences from the other dialects. Considered a language isolate, Elw has, however, a large number of loans from other languages, such as Treesian, Elfinshi, Babkhi, Norse, and Præta.

Elw is a dominant language in the arts and social sciences.

Elw is an official language of the Elwynnese Republic.

Proportion of native Babkhi speakers per bailiwick. (Leng and Raikoth not shown).

The Babkhi language arrived to Elwynn during the 1490s during the Ardashirian immigration wave. It is the largest spoken language in Elwynn, but is concentrated largely in the south of the country. Related to Agnesian, and more distantly to Istvanistani and Norse, it is a dominant language in the arts, the military, and the engineering sciences.

The Babkhi language was, prior to the Blackfriars Revolt, written in the Zend and Baatharzi scripts. The use of the Baatharzi writing method was subsequently suppressed on account of its association with Umraism. In contemporary Elwynn, Babkhi is usually written in a modified variant of the Istvanistani script, but the Cyrillic script provides a popular alternative, especially for second-language speakers. See Cyrillic Babkhi for more information.

The Babkhi of Elwynn is influenced in vocabulary by Elw, Mishalanese, Præta and, in terms of grammar, Istvanistani. As such the Babkhi of Elwynn is considered a distinct dialect of the world-wide Babkhi language (from Babkha), and since the Euran holocaust in 1599, it is the largest Babkhi dialect in the world.

There are no major regional differences in Elwynn in how Babkhi is spoken by the native Babkhi-speaking population.

Proportion of native North Amokolian speakers per bailiwick. (Leng and Raikoth not shown).

The North Amokolian language is spoken, as implied by its name, in the northern parts of the traditionally Amokolian areas, that is in traditional Amokolian areas that are not Mishalan. It is sometimes referred to as the Amokolian language, and sometimes its main dialects are considered languages themselves. The main dialects are Anunese (in and around Anun), Automatican (Automatica outside Anun), Vaten or Vattnalandic (in Vattnaland), and Oleslaadish in Oleslääd.

The language is closely related to Batavian and less so to Norse and more distantly still to the Babkhi and Agnesian languages.

Proportion of native Istvanistani speakers per bailiwick. (Leng and Raikoth not shown).

The Istvanistani language is the most commonly spoken second language in Elwynn, but only 6% of the Elwynnese population speak it as a first language. Istvanistani has for the last two centuries been a lingua franca in Elwynn and in much of Benacia and the world, yet few people, even to this day, choose to speak to their children in that language. In Elwynn, most native speakers are concentrated in Fieldburg, Wintergleam and Iserdia.

Istvanistani is written with a simplified version of the script of ancient Khaz Modan. By virtue of association over the past 230 years, the script is universally referred to as being "Istvanistani", same as the language.

Istvanistani is an official language of the Elwynnese Republic.

Proportion of native Norse speakers per bailiwick. (Leng and Raikoth not shown).

The Norse language of Elwynn is, outside Normark where it is the absolute largest and most dominant language, spoken by at least 80% as a first language, largely concentrated around Elwynn's northern Benacian coast. It has several dialects, for example Farewellish in Cape Farewell, Wintergleamish in Wintergleam, and Normark Norse (derived from immigrants from Normark).

The Norse of Elwynn first arrived during the first years of the 16th century. The new Count of Elwynn, Richard Lyon (also known as Rashid Arsalani), had married a Hurmu woman, and Elwynn's position as a county of the Arminian barony of Hurmu made a large influx of Hurmu administrators necessary to the impoverished and wartorn Elwynn. The Hurmu immigrants settled along the northern Elwynnese coast, where the traditional methods of fishing could be kept even in a new, and much colder, country.

The third dialect to arrive was Normark Norse. Normark joined the Elwynnese Union in 1592, and a massive immigration wave began, lured to Elwynn's administration and military, and higher salaries and standards of living. The immigration continued, even after Normark's independence and, especially after, Normark's death, as Elwynnese citizenship was easily atteinable for descendants of citizens of the Elwynnese Union (as all Normarkers were during the union with Elwynn).

Lastly, the fourth wave of speakers, the so-called Froyalaners arrived during the period of the Vanic State (1623–1651). Immigration was record, of about one million Storish per year, and many of them not finding it necessary to learn a non-Norse, non-Istvanistani Elwynnese language. This massively skewed Elwynnese demographics.

In order to differentiate and protect their dialects from the Froyalanish dialect, the Normarkers, Wintergleamers and Farewellers began developing a standardized written language in common from them. Previously, each dialect used their own written standard and considered themselves as distinct languages. Now, however, they feared cultural extinction. The new standard, called Elwynnese Norse, was a compromise between the respective standards. Elwynnese Norse has three grammatical genders (masculine, feminine, neuter) and grammatical cases are optional (except for personal pronouns).

Proportion of native Præta speakers per bailiwick. (Leng and Raikoth not shown).

Præta, formally known as ia Sziroþs Præta ("the Shirerithian Speech"), is the official language of Shireroth, and despite Elwynn's subjugation by Shireroth throughout the centuries, Præta is not spoken by a large proportion of the Elwynnese population. It is only a majority in the previously non-Elwynnese newly acquired territory (since 1672)of Orenthaven (previously belonging Goldshire), and has only a somewhat visible presence in Wintergleam and the most souternparts of Alalehzamin (due to the proximity with Præta-dominant areas).

Præta is related to Istvanistani, Norse, North Amokolian and Batavian, and also more distantly to Mishalanese, Babkhi and Agnesian. It is not an official language of Elwynn, usage of it outside its visible areas is considered taboo.

Proportion of native Mishalanese speakers per bailiwick. (Leng and Raikoth not shown).

It is written with the Cyrillic script. Outside Mishalan and Vattnaland uncommon.

Proportion of native Agnesian speakers per bailiwick. (Leng and Raikoth not shown).

Proportion of native Cimmerian speakers per bailiwick. (Leng and Raikoth not shown).

Kalasperin is the vernacular language of Raikoth. Related to Cimmerian, and from which Kadhamic was developed, it is an agglutinating verb-subject-object language. Historically written with its own distinct script, Cyrillic or Latin scripts are preferred these days.

The Lengish language is a small phonologically complex language spoken in Leng. Outside of Leng, it has no major presence. In Leng, mainly spoken by the native population. Newer populations tend not to learn it.

The Kadhamic language is an artificial language, not spoken, but used, in Raikoth. It was developed with the aim of having a fully objective language for the use of philosophy, politics, science and statecraft.

Its austere, minimalist structure removes assumptions and value judgments - making propaganda, hate speech, and logical fallacies difficult. For example, a sentence like "Southerners dislike art" would be ungrammatical: the Kadhamic version would come out more like "(I believe with between 50-99% probability) (a majority of) Southerners (have a significantly greater tendency than Northerners to) (emotionally) dislike (what I define as) art", an empirical statement which can then be investigated to determine its truth or falsehood. An absolute taboo on discussing emotional issues like politics in any language but Kadhamic prevents it from becoming a source of division in society and leads to an unusual amount of concord on what would otherwise be controversial issues.

Outside Raikoth, learners can be found in university clubs and in special subcultural groups. Despite its academic nature, it is not used outside Raikoth in any academic, scientific or political setting.