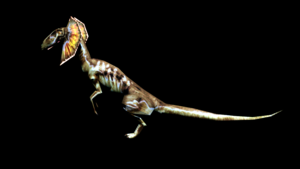 Pictured: A mysterious and poorly understood creature, the La-Adred-Nas is believed to spend most of its time in the extensive cave system which runs beneath much of Corum.

A medium-sized creature similar in appearance to the Aebni-Adred-Irf, the La-Adred-Nas is believed to make its home in the region's extensive cave systems. Coming to the surface only to hunt larger prey than that found underground, this species is not very well understood. That said, the vivid blue scales of the La-Adred-Nas are worth large amounts of money, for anyone bold enough to travel into the depths of the world in order to hunt them.

Found in only 3 out of 20 Pallisican cities in Corum, this species is uncommon. 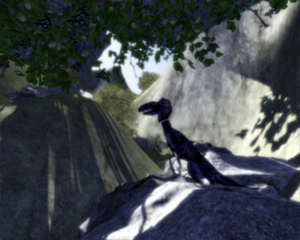 The La-Adred-Nas can most often be found underground, in the vast volcanic cavern systems which extend under much of Corum.

Originally hunted by pirates seeking to earn a quick fortune in overseas markets, the La-Adred-Nas is covered in bright, shiny, blue scales which can be sold at markets outside of Corum for extremely high prices. As a result of the lucrative trade which surrounds its scales, the La-Adred is quickly becoming endangered in many of its natural habitats. Many conservation groups have called on the government of Passio-Corum to protect the La-Adred-Nas, and to prohibit the cultivation and sale of its scales, but as of yet the government has adopted no extensive, formal measures to do so. 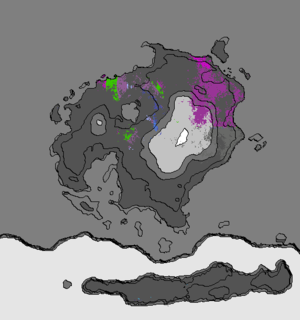 The range of the La-Adred-Nas extends across 20% of the landmass of Corum. The majority of the species' range - 77% - lies within the warm Mediterranean and Temperate climate regions of northern and eastern Corum, while around 10% lies in the Continental and Sub-Arctic regions to the east of the Riponian Highlands. Like the Imab-Adred-Nas, the La-Adred-Nas is relatively uncommon in Corum's cooler regions. There are no confirmed reports of any La-Adred-Nas in Corum's polar regions, although evidence indicates that there may be a small population in a remote corner of Hypernostria.

Although the La-Adred-Nas is primarily a lowland species, populations have been documented across the Riponian Highlands, including in the Central Riponian Mountains themselves.