Difference between revisions of "Kolmenitzkiy"

Kolmenitzkiy (pronounced kɒlmɛnɪtzkɪ, also known as Nackolom to the Minarborians and Kalgachi, and labelled Nackholm by the Shirerithians) was the capital city of the Republic of Ashkenatza and its largest city. On both sides of the River Mandel, it was where the country's legislature, the Knesset and where the Nohsi, the Ashkenatzi head of state, resided in Ruzhin Palace. It was also one of the oldest inhabited cities of Ashkenatza, having developed from a small Shtetl on the riverside in the middle ages. The city has ancient ruins and a great deal of cultural wealth. It also served as the capital of the Kolmenitzkiy Capital Territory, a separate administrative region within Ashkenatza.

In latter times the city fell into the hands of the Empire of Minarboria, before and after which it spent long periods without any recognisable governance - resulting in drastic changes to the city landscape and, to a lesser degree, the population dwelling within it. 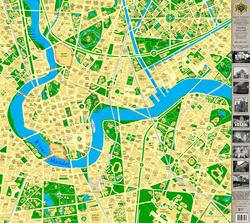 In its heyday the city was served by Kolmenitzkiy Edelmann Airport, and Bar Kochba, Grunwald, Altshuler and Lazarus Central Railway stations. It was a major hub for the Ashkenatzishe Blitsban high-speed rail network. Heavy industry, petrochemicals, aviation technology, pharmaceuticals, metallurgy and tourism rose to become major sectors of the local economy, alongside the traditional commerce and trading for which the old market city was always known.

Main sights included I.L Peretz Square, home to the Knesset and National Library, Asch Theatre, Pressenstein Castle, Independence Tower, Botanic Gardens, Altshuler Bridge, Tzvi Museum of Antiquities, Ancient Amphiteatre and well-preserved historic Town Centre. The city was divided in two by the River Mandel, spanned by fifteen bridges. The city's oldest district, on the north bank, was built on a sharp bend where the river turned towards Volhyria. Defended by the impressive Yabotinsky and Naye-Masada Fortresses, this became the richest area culturally and was the location of the majority of government ministries and offices. Further to the north across the River lay the district of Grunwald, home to the villas and art-nouveau mansions of the city's urban elite. To the North-East lay the Oktagon, a fashionable district which in its day promised to become the cultural heart of the city, itself flanked by the Tellian and Mahozi districts of the city, overshadowed by the Tellian Catholic Cathedral of San Antonio. Further south across the city's canals lay Kolmenitzkiy's river port and markets, over the hill bearing the impressive Mother Ashkenatza Monument. To the East was Menasseh, site of the palace of the former Nohsim of Ashkenatza.

Kolmenitzkiy's Southern Bank was more industrialised than the northern half of the city, incorporating the city's airport, petrochemical and heavy engineering industries. Tzur Hill, across the river from Menasseh, was the location of many fine museums and the districts of Nayeshtat (famous for its Protonium and street markets) and Chernivsk, with the Galitzyaner Plats and Chernivsk Grand Synagogue. The Hasidic district of Kerem Ha-Shalom lay to the extreme South-East, and across the railway lines lay the Purimsky and Jurek districts, heart of the city's engineering industry. Krelitz, Zmudik, and Mahoz HaKaraim districts were gentrified, University areas known as being isles of green in the bustle of the capital. Yigael, across the river to the West from the city centre, was known for its Jazz scene and riverside embankment.

Perhaps its biggest claim to fame was that Kolmenitzkiy had one of the largest micronational city maps ever made for its time, at approximately 2800 by 2400 pixels square. 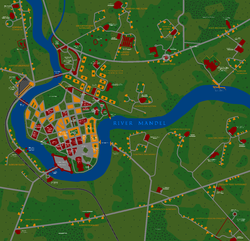 A map of the much-reduced city under Minarborian rule, the vintage of its structures divided into Ashkenatzan (red) and post-Ashkenatzan (yellow).

Civilisation was only restored with the rise of the Empire of Minarboria in what had been the Eastern provinces of Metropolitan Ashkenatza, that Empire's westward expansion being ordered with almost languid indifference by its ruling Empress whose only interest in the Kolmenitzkiy area was as a buffer zone against Shireroth. The resources assigned to the effort were thus comically modest, consisting as they did of a single regiment of undead Laqi cossacks known as the Karymovka Host and a retinue of civil servants from the Minarborian capital, Sansabury, who patiently awaited the pacification of almost two million square kilometres of territory by 3500 hard-pressed undead horsemen.

Fully cognisant of the challenges involved, the leader of the Karymovka Host - a laconic lich by the name of Zemphirius Karymov - realised the only hope of meeting his objective was the negotiated enlistment of local Kossar warbands to his cause, through a series of affable briberies backed by the immense resources of the Minarborian state. Having steadily succeeded in recruiting around half the local brigands, Karymov tasked them with the violent suppression of the other half and in time he found himself in a position to assume absolute power over the annexed territory, in lieu of anyone else being appointed to the role by his eternally-distracted sovereign Empress. Thus was established the Shophate of Siyachia, by which the scattered shtetls of old Ashkenatza were united under Karymov's rule with the assistance of an ascendant rabbinical elite known collectively as the Kohanim, themselves wielding immense power on a local level and assigned the implausible task of syncretising Benacian Judaism into the Minarborian faith; an endeavour in which they were only ever partially successful, the chief product of their efforts being the emergence of the Shrubagogues as the primary religous venues of the era.

By this time, all that remained of the city of Kolmenitzkiy - renamed Nackolom under the Shophate - was the ruined shell of the ancient Yabotinsky district and the more robust of the outlying synagogues, the latter being surrounded by clusters of ramshackle cottages practicing subsistence horticulture on those areas of the city which had previously been parkland. Between these suburban islands lay great swathes of untillable scrubland, often a mere inch or two of soil concealing an immense substrate of rubble into which the city's less resilient buildings had fallen. Under the Shophate, the old roads linking these settlements were repaired and the assorted bomb sites and rubble heaps of the city's ancient heart were rebuilt once more into a functional capital, albeit a provincial one. These regeneration works were done in accordance with the ancient street pattern, with the only substantial change to the landscape being the construction of Eshirriatka, a district of medium-density housing (condoraion in the terminology of the time) just outside the ancient city walls. Eshirriatka was named for Shyriath "Condolord" Farstrider, Minarboria's Second State Arborist (interior minister) who had already earned undying fame for his achievements in the field of medium-density housing across the Benacian continent from Shirekeep to Sansabury. His latter boost to Nackolom's housing stock achieved, the slums full of itinerant vagabonds elsewhere on the city fringes were finally cleared and the city achieved some semblence of civilised function.

Minarborian power was, alas, entirely dependent on the field of necromantic ley lines which kept its undead ruling class in a state of animation. With the gradual and inexplicable weakening of this field, the entire apparatus of Minarborian state began to fall apart. Shophet Zemphirius in Nackolom was no exception, being a member of the lich classes himself. In Minarboria's dying days he fled Nackolom to gather his undead family and seek refuge in the mountains that would become Kalgachia, a futile task as the collapse of lichdom ultimately left no place untouched and caused Zemphirius and all of his undead relatives to dissolve into to dusty bones regardless.

In the absence of their presiding Shophet, the Kohanim of Nackolom and their Kossar strrongmen soon found nobody to settle their arguments and descended into the very same state of factional warfare and plunder which had characterised the previous interregnum - although the temporal re-materialisation by Minarborian physisicts of one Pachad Emet ben Mavet, former Nohsi of Ashkenatza, did leave a local personality of sufficient weight to rally the strongest faction of those post-Shrub years.

The surviving population of that much reduced former metropolis now rejoice under the reign of ben Mavet and his Natsyonal Maroon-Integralism Bund, whose florid and passionately espoused ideology remains obtuse to most ordinary inhabitants. Nonetheless, as the successors to generations of obsessive debaters and disputers, the impenetrability of the new ideology makes the arguments arising from it ever more arcane, esoteric and intense; and thereby practically a pastime for the denizens of Kolmenitzkiy-Nackolom as they go about their daily lives scavenging for food, bartering their bodies for shelter, and queuing despondently for tickets to work in Mavet's innumerable machine repair workshops.

The Southern part of the city was for a while under control of the Kasterburg Republic as the city of Kolmenstadt. It retained little of its former glory and was mostly populated by retired military service personel. 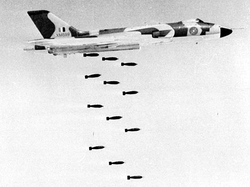 For seven days and seven nights in the year 1659 the Shirerithian Bomber Command sustained a round the clock pattern of air-raids against what remained of the city in an attempt to either drive the Batavians from Nackholm or to render the site completely uninhabitable.

Ben Mavet had been a marked man since the days of Operations Erebus and Bait Harvest. In 1657 with the war all but over Benacia Command grasped at the opportunity to settle an old score with the small but annoyingly persistent band of brigands who had what the Shirerithians habitually referred to as "Nackholm" as their den.

This exterminating raid was followed by a more concerted effort to occupy the city and reduce the dwindling band of survivors to subject status.

The repeated attacks by Imperial Forces against Yehudi self-defence groups in Nackholm and its surrounding environs cleared the way for a swift and violent takeover of the ruined northern portion of the city and the ouster of the dwindling band of survivors that comprised the Ben Mavet Organisation. Another round of furious Shirerithian airstrikes ensued once they realised the full extent of what had transpired.

Approximately 3,500 residents of Nackholm perished during the settlement's liberation from Voortrekker occupation, a further 6,337 perished from the effects of malnutrition and disease in the immediate aftermath, while 3,215 women and girls - mostly of the Kohanim and Levite families - were gathered in Peretz Square before induction into Imperial service as Loyal Subjects.

Under Imperial occupation, Nackholm has become a popular destination for ethnic Babkhi from out east. Their motives vary for making the arduous schlep to the west but for many it seems to boil down to availing themselves of the opportunity to gloat amidst the ruins of their fallen ancestral enemy.

In the year 1662, to celebrate the second anniversary of the liberation of the city, a statue dedicated to Ushas-Eluin was installed on the pedestal of the Monument to Siyachi Motherhood in Minyan Tiflis. The hollow statue, forged from kossar sabres and Neo-Batavian rifles melted down in the Nackholm Foundry, standing at 15 metres, atop of a 30 metre pedestal, depicted a female nude, whose long flowing hair is woven with orchid flowers, with archonic wings, wearing a four-tiered horned crown, holding the flaming sword in her right hand and the distaff in her left. The world serpent - Jörmungandr - coils, sensually, around her legs, whilst her feet tramples the prostrate, mangled and lifeless forms of a Jing, a Voortrekker, a Paliscian, and a Vanic priestess. The base of the monument was defaced, with the original reliefs chiselled away and in their place was bolted on a series of moulded lead friezes in bas-relief - depicting scenes from the Shirerithian conquest of Inner-Benacia alternating with depictions of anthropomorphic representations of the subject nations carrying cornucopias to lay before the Young Kaiser (identified by the halo, aureole and the entourage of prostrate eunuchs surrounding the Imperial Personage).