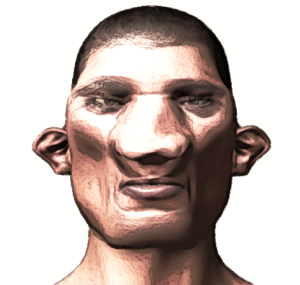 The son of the late Queen Mina, daughter of Lucien III, who laid the groundwork for what would become the Second Republic of Passas, Lucien IV is revered as the father of the Realm of Passio-Corum. Although the year of his birth is unknown to the public, it is believed that Lucien IV was born in Zidado West some time in the early 720s. As a child, Lucien IV received a formal, private education, provided by his mother, who by that time lived a relatively private life in Zidado West, having abdicated from the throne of Passas in 731 WG. Lucien IV, as a boy, is believed to have been fairly poorly behaved. It is said that he would often disappear into the Pallisican country-side for days at a time, where he would explore the many ruins and caves which litter the landscape, much to the concern of his mother, who raised him without the direct support of his father, who ruled the distant Wallis Islands.

As a young adult Lucien IV attended classes at the University of New Kirrie, in the capital city of Hamland, where he studied history and economics. During this time the young, future king of Passio-Corum is said to have developed a great admiration for men like Duke Sinclair, who virtually single-handedly laid the framework for the Passasian Economic Model, which would eventually evolve into the Hammish Economic Model, which today is regarded as the most complete, developed economic model in the world. Despite the fact that it was ultimately his political machinations which eventually led to the fall of the Passasian monarchy, Sinclair came to serve as an important role model for young Lucien IV, who already dreamed of combining the ideas proposed by Sinclair, with those principles long practiced in the Kingdom of Passas, in order to re-establish, expand, and empower his family’s royal lineage.

After college, which he did not actually complete due to unknown mitigating circumstances, Lucien IV left Hamland for the Wallis Islands, where he worked in private alongside his father, Erlo Sinders, on efforts to explore and settle Northern Corum on behalf of the government of the Wallis Islands, which planned to eventually secede from the Free State of Haifa in order to establish itself as a wealthy, independent nation of its own. In 751 WG, Lucien IV was appointed by his father to lead the construction of settlements on the island of New Zimia, in the Eastern Wallis Islands. In this regard, the future king proved exceptionally adept; construction of New Zimian settlements, as well as work on a small naval base in the island’s east, was completed within only two years. When, in 752 WG, the island of New Zimia was sold to the Passasian War League, Lucien IV left the islands for the mainland, where he immediately set to work building and communities amidst the region’s ruins, attracting setters, and designing a new nation, ruled by a government, which, as he had long dreamed, would combine the principles of the Passasian monarchy with the ideas proposed by Duke Sinclair. This work came to fruition for the first time when, in early 753 WG, Lucien IV, who had declared himself king of the new nation of the Imperial Republic of Passio-Corum, called for a constitutional convention, which would result in the creation of the national constitution which remains in effect, unchanged, to this day.

In his first five years as King, Lucien IV joined the Imperial Republic to the Standardized Currency and Unified Economy, which allowed the nation to begin trading on the Hammish Stock Market, established the nation’s military, which would be used to defend the nation against the serious threats posed by pirates and other organized criminals organizations, and ordered an extensive survey of all of the region’s plants and animals. Within a little more than a decade, King Lucien IV oversaw the nation’s successful application to join the Micronational Cartography Society, as well as the unofficial annexation of the Wallis Islands, which by this time were in a state of perpetual protest against the unstable government of the Free State of Haifa. In 764 WG, the King was celebrated when Wallis Islands Investment Firm, the bank of the Wallis Islands, relocated its headquarters to the capital of Passio-Corum. One year later, the King authorized a treaty between Passio-Corum and the Commonwealth of Hamland, in a move which was also widely celebrated by the nation’s growing population.

In 766 WG, King Lucien IV authorized the purchase of the island of New Zimia, in the Wallis Islands, from the Passasian War League. From the small naval base located on the island, the New Zimian War League, under the command of King Lucien IV, led efforts to keep peace in the Wallis Islands, where protests continued against the Free State of Haifa, before turning its attention to eradicating the region’s pirates, which continued to plunder the nation’s expanding shipping lanes. In general, the period between 770 and 775 is marked by a series of intense military operations against the region’s pirates, including major operations to root out organized crime in the Sirrocan colony of Port Brent. These operations culminated in 773 WG, when a series of pitched battles resulted in the deaths and arrests of several very notable pirate captains, including the infamous captain, Ozeruv Mavge. During this period, King Lucien IV also met with the leaders of the continent’s indigenous peoples, in an unsuccessful effort to develop trade routes across Corum’s Inner Desert.

Twenty-two years after assuming the throne of Passio-Corum, King Lucien IV issued his widely popular Passio Corollary, in which he expressed his belief that as the region’s leading power, Passio-Corum had an obligation to developing governance and infrastructure across Northern Corum. As part of this corollary, the king announced plans to deploy the nation’s soldiers back into the cities of Port Brent and Shirley, and into the Wallis Islands, where they would work for an indefinite period time building roads, schools, and hospitals. Furthermore, the Passio-Corollary extended the opportunity for the peoples of the Wallis Islands, Port Brent, and Shirley, to officially join Passio-Corum. This invitation was well received in all three areas, especially in Shirley, where within two years, residents voted in favor of joining the nation. In 777 WG, King Lucien IV approved the annexation of Shirley, despite calls within the government to reject annexation, on the basis that Shirley was a cursed city.

Following the annexation of Shirley, things became relatively quiet for King Lucien IV for nearly a decade, despite an apparent small resurgence of piracy along shipping lanes, and despite a wave of panic in Eastern Passio-Corum regarding a number of brutal, peculiar murders. Aside from the establishment of a trade agreement with the Republic of Stars regarding that nation’s oil, King Lucien IV remained largely out of the public’s attention. The reason for this is unclear, though it is generally accepted that the king was preoccupied with courting a mysterious, alleged sorceress from the Passasian Outer Realms. Whatever the case, the king returned to the public’s attention when, in 787 WG, he authorized a Naval Commission which would allow the Hammish military to fund the construction of a shipyard in Shirley, where a number of advanced warships and cargo ships would be produced, including the Zimia Class Submersible Destroyer, and the Lucien Class Cargo Ship. This authorization of this naval commission would be the first of a series of decrees regarding the expansion of New Zimian Industry, including one which would authorize funding for efforts to import uranium from the North Antarctican Peninsula, one which would expand silver mining efforts in Eastern Passio-Corum, and one which would authorize the funding of a company which would oversee the construction of a nuclear power-plant in the city of Seemsy. This series of decrees, which were issued between 787 WG and 793, expanded the nation’s economy to levels never seen before, and promoted a surge of immigration from Hamland and the Free State of Haifa, as well as a desire for expansion, which manifested in the short-lived colony of Portsmouth, in Eastern Corum.

King Lucien IV accomplished much in his forty-six year reign. From the establishment of the nation in the 750s and 760s, to the expansion of the nation’s role in Northern Corum in the 770s and 780s, to the massive development of the nation’s industry in the 790s, the first King of Passio-Corum left a legacy of self-determination and a commitment to improvement which will resonate through the ages. Regardless of the mild controversies which surrounded the king in the last years of his reign regarding the colony in Portsmouth, Lucien IV continues to be revered as an icon not only for the people of Passio-Corum, but also for the people of Passas, who regard the efforts of the King as a testament to the resilience and determination of the peoples of Pallisica, and who continue to honor the legacy of the lineage of Lucien I, who unified Passas after centuries of war.