Kezan, also known as the County Palatine of Kezan is an Imperial State of Shireroth, consisting of two islands, Eleutherios and Akis, as well as a number of islets, sandbars, and artificial structures going 24 nautical miles outward from the coastline of the two main islands. Population is (1656) 2,027,121 of which 264,407 are citizens. There are no loyal subjects or community servitors resident in Kezan.

Kezan is under the perpetual rule of House Octavius, in accordance with Imperial Decrees 637 and 658.

The name Kezan derives from Fort Kezan, the comital seat. Ft. Kezan was founded as Overseas Operating Base (OOB) Kezan by the Second Antican Republic to act as a forward military position during the Shiro-Elwynnese Conflict. OOB Kezan was itself named in honor of the code name used during Operation Light Blue Octopus, its ultimate etymology being unclear.

The main island of the County Palatine, Eleutherios, was assigned this name by Anticans when drawing up maps, naming it after their republican principle of "liberty". The minor island, Akis, was named after an old colloquialism for a child, derived from the patronymic suffix -akis.

The two islands' names before Antican occupation were Sunderney and Ardholm, respectively. These names remained in common use among the locals until the islands were settled heavily by Antican refugees.

History of the Islands

The islands enter the historical record unnamed on a map that charted the coastline between the United Baronies of Treesia and the Dutchy of Kildare.

After asserting their independence from Natopia, Holzborg collapsed and the islands fell back on self-rule.

During the Fifth Era, the Second Antican Republic took control of the islands and established Overseas Operations Base Kezan in the western part of Sunderney, which they renamed Eleutherios. This was during the greater Shiro-Elwynnese conflict, in which it would act as a forward position against Shireroth. Beyond OOB Kezan and some settlement in the eastern port town, Anticans left the islands to its inhabitants, a sparse network of farming and fishing villages.

In X.1596 AN, the Second Antican Republic abruptly collapsed as a result of the hijacking of Antica's autonomous weapons systems and nuclear arsenal. Much of Mainland Antica was irradiated and millions dispersed in the Antican Diaspora. Of the surviving post-Antican states, Aryasht integrated itself into Shireroth, while Albion and Kaikias-Overseas attempted to maintain order before themselves falling as well.

Founding of the County Palatine

In VII.1602 AN, Kaiser Aiomide, of mixed Antican and Elwynnese parentage, refounded House Octavius as a noble house in Shireroth and organized the islands of Eleutherios and Akis into the County Palatine of Kezan to act as its seat.

During the formative period of the County Palatine, Kaikias-Overseas completed its collapse, adding to the Antican Diaspora. Many displaced Kaikian Anticans were resettled in Kezan under the promise that House Octavius would uphold traditional Antican rights.

The Kezanese Archipelago is the string of islands under the control of the County Palatine of Kezan, consisting of three major islands and half a dozen smaller islets.

Dura. The most populated island in the Hawshire Free State, as well as its seat of government. Previously a protectorate of Shireroth and, previous to that, an independent kingdom.

Ossium. Formerly Otzum, the southernmost island of the Hawshire Free State and at the midpoint of the archipelago, its local population was transplanted to eastern Dura and handed over to the County Palatine for Kezanese settlement in 1695 AN.

Eleutherios also known as Sunderney. Referred to as the "Main Island" in government documents. The southernmost major island, the seat of government for the County Palatine, and the most populated island in the archipelago.

Court of the Count Palatine

The Executive Council also maintains a set of commissions tasked with informing it on petitions from residents and local authorities, requests for the exercise of the prerogative of mercy, and instances of corruption found within the central court or in local government. Beyond these standing commissions, additional commissions may be created for the purpose of analyzing an issue in depth and providing recommended solutions.

The Household Agency is a non-governing agency responsible for maintaining the properties in possession of House Octavius and to provide services and security for members of House Octavius.

The primary unit of local government in the County Palatine are its 53 Wards. The wards are responsible for administering and providing local services, such as dissemination of news and entertainment, education, infrastructure, safety, telecommunications, and utilities.

These 53 wards are organized into five Honours: Aryani, Adelaidini, Leilani, Parini, and Teleni. The Honour Court grants resource-use leases and acts as a court of equity and appeals as well as provides oversight for the wards.

The City of Idassa is self-administered, provides all local services as well as its own courts of equity and appeals, and is organized into four quarters.

Lastly, the three Liberties, of Ft. Kezan, of Akis, and of Ossium, are administered directly by the Court of the Count Palatine. Akis, uniquely, is co-administered through the External Affairs Bureau and the Militia Bureau, and officially does not have a permanent population, consisting of military bases and an extensive port to facilitate international trade.

Service Uniforms of the Kezan Militia, 1610 to present

The Kezan Militia (KM) is the defensive organ of the comital government, tasked with providing defense for the territory and its population. The KM is one of two primary options for national service within the County Palatine, the other is Civil Protection. As such, the KM is a conscript military force. The bulk of KM personnel are Kezanese Nationals in reserve status, with active personnel divided between those fulfilling their service obligation and "careers", who maintain the defensive apparatus. 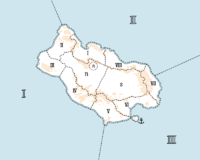 KM Headquarters is located at Central Fortress in the Liberty of Ft. Kezan. The Chief of Staff is Commandant Isidora Octavius-Teleni. Operations and deployments are organized into four Command formations:

Weaponry consist of a mixture of arms purchased from overseas (universally from Shirerithian firms) or manufactured locally by such companies as GAM (formerly Geine Arms Manufacturers) and the Todorruhe Concern, both of whom license and manufacture modified versions of Assayers Armaments and Royal Ordnance Factory Lichkeep.

The Kezan Sea Battalions are a separate military force that is administered under the Kezan Militia's Maritime Command, but under operational authority of the Hawshire Free State's government. It is a voluntary formation, composed of Kezan Militia veterans rated with high competency scores. All members are trained in urban warfare, with service divided into ground combat, air combat, or logistics.

There are four Sea Battalions, which rotate between deployment to Hawshire and training in Akis.

The Education Bureau of the Ministry of State is responsible for the educational standards, methods, and policies for all educational institutions within the County Palatine of Kezan. Education is compulsory between ages 6 and 15. Nursery schools operate locally and are certified to operate by their local government.

Primary and Secondary schools are ran by the local government. In all cases, there are multiple primary schools in each ward, distributed in such a way as to best fit the needs of the community. With few exceptions, each ward operates a single Academy and Technical School, usually located at or near the population center. Tertiary education is administered by the Intercollegial Partnership under the Education Bureau, except for the College of Our Lady Erganē, which is an independent institution.

Due to the Service Obligation, an interruption of two years can be expected at any point following Primary School, which is compulsory for all children between ages 6 and 15. Ward-certified nursery schools for children below age 6 are used by 82% of the population, with the remainder cared at home or in unofficial and unfunded community groups.

Beyond compulsory education, entry is precipitated by an entrance examination, so changes between academic pathways are available to those who can demonstrate aptitude in prerequisite skills.

A regular element of student life, especially at the Primary School level, is the Rotation of Tasks. Certain classroom duties are rotated on a weekly basis, from sweeping the floor all the way up to class leaders. The regular rotation of duties, in such that it gives each student an opportunity to serve, to assist, and to lead, is believed to contribute to the Kezanese cultural norms of group awareness, self-organized shallow and dynamic hierarchies, and fundamental equality.

Class Leader - Helps the classroom teacher in keeping the classroom and student-performed tasks running smoothly. This includes taking attendance, reciting the daily schedule, leading the group in the hallway, and filling in for absent students in a task team. The Class Leader wears a bright orange armband on the left sleeve.

Meal Team - Two teams, one for breakfast and one for lunch. Reports to the school kitchen to prepare their assigned meal, transports it to the classroom, serves it to their classmates, and then return the materials to the kitchen. Members of the Meal Teams wear white jackets and hats while performing their duties, to keep their regular uniform clean and hair out of the food.

Cutlery Team - Distributes clean food trays, bowls, and utensils, readies the classroom for the Meal Team to bring the meal.

Janitorial Team - Leads the cleaning of the classroom, performed three times. Usually limited to sweeping and gathering waste, but are responsible for taking care of spills or other messes that happen during the day.

General Team - The remainder of the classroom. Available to assist in clean-up (responsible for moving furniture out of the way of the Janitorial Team and to wipe down surfaces) and other duties.

Ethnic groups in Kezan are categorized according to whether they are "acculturated" or unacculturated. Acculturated groups are considered primarily "Kezanese", with signifiers to indicate their variety.

The dominant ethnicity, Antican Kezanese, makes up 67.4% of the total population. Sunderneyer Kezanese, the only group native to the islands, continues to make up 13.9% of the population.

The Holodomatic School is the predominant religious movement within the County Palatine. Its primary liturgical rite is derived from Kaikian Antican practices, with alternative rites associated with dedication to Elwynn (Elw Rite), to Adi Paraśakti (Aryashti Rite), etc.