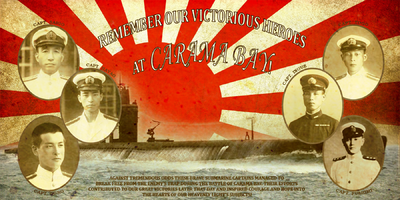 The six surviving submarine captains (Saigo, Hayao, Goro, Togo, Inoue, Fushimi) of the Battle of Carama Bay were portrayed in Jingdaoese press as great heroes. Their victory, however, could not rally sufficient support behind the Navy's reform plans after the War.

The Kantai-ha is a group of naval officers, and their supporters, in Jingdao. A prominent member of the faction was admiral Liang Dumyan, who aided in the restoration of the Chidao Emperor to the Throne in 1659 AN. While this group always held a considerable amount of power in politics, its power base quickly diminished after the War of Lost Brothers. With a redeployment of military and civil personnel to Apollonia, and the end of the policy which established oversea bases, the faction was soon overshadowed by the Gunbatsu and Guanchang.