At the time of her death, she was Elwynn's oldest (human) inhabitant. She had lived almost all her life in the cottage where she was born, living there until her ascension to the throne on 22 Oskalteq 1620, when she moved to Raynor's Keep in Shirekeep. Never-married and considered somewhat of an excentric, she is considered one of Elwynn's most famous living non-political people. Though, to the detriment of many, she rarely travelled anywhere than to the closest village, Aderuin (about 450 km east of Michaelion). Not much of her life before kaisership is known, as she didn't speak much of it.

When Elsa was born, the ruler of Elwynn was Duchess Mari Greenwood. Later, she recalled how she, during the Elfinshi War, chased off Ardashirian soldiers from her farm with a shotgun when they tried looking for Elfinshi hide-aways (she also chased off Elfinshi refugees, but, in hindsight, she was, for political reasons, not so proud of that fact).

Until her ascension as Kaiseress, in Elsa's life, fourteen dukes and duchesses, four barons, one count, two presidents, eleven princes, and several stewards and regents, had ruled Elwynn, until she herself became Kaiseress. That office she held until her death.

When Kaiser Redquill abdicated, he simply announced that "a new pair of eyes" were needed for Shireroth's rule. To the surprise of all, Elsa Kasanrajon was named the new kaiseress. Aasmund Vigeland, then Imperial Minister of Military Affairs, was tasked with finding the kaiseress in her cottage. A few hours after Redquill's abdication, Vigeland released a statement. It said "Officials of the Imperial Republic have attempted contact with the Kaiseress at her cottage in Cape Farewell county. Whenever an official has reached her door and knocked on it, the Kaiseress has replied 'Go away'. Officials of the Imperial Republic have obeyed the orders of the Kaiseress as is their duty. We have requested assistance in contacting the Kaiseress from Elwynnese authorities. They have so far declined assistance, citing how amusing they find the situation. We expect the situation to be resolved within a few hours."

On the morning the next day, Elsa arrived for the first time in 100 years in Shirekeep. "I am still not that impressed", she wrote of Shirekeep in her first decree. The next decree appointed Vigeland her steward, made the Elw calendar co-official in the Imperial Government, and ordered the Arbiter to review the problems with the Charter and recommend changes. The Arbiter's review was completed during the reign of Kaiser Ayreon III, and the changes were implemented with some modification during the reign of Kaiser Verion I.

Kaiseress Isa's relationship with Vigeland was complicated. She was seemingly oblivious to Vigeland's communist ideology. She had never been interested in politics, but she detested communism. Somehow, she did not know that Vigeland had, before the restoration of the princeship in Elwynn, been the architect of the Communist Revolution there. Once she realised that Vigeland was a communist, she raged for hours to no end. She quickly decreed that "Communists are not people, they are animals". All people that had known that Vigeland was a communist were to either apologise to her or "face the firing squads". 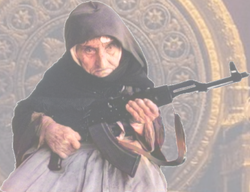 Depiction prepared by the Imperial Iconographers of the Kaiseress immediately after her realisation of her Steward's ideological inclinations.

She ordered all armed officers of the Imperial Republic to kill Vigeland and bring his head her to her. The secret service known as S.W.O.R.D. apprehended Vigeland, and, without killing him, brought him to Raynor's Keep. With Vigeland before the Kaiseress, the Kaiseress ordered a soldier (known only by the codename Foxhole) to shoot Vigeland in the head. He died immediately. Then she looked at the soldier, uttered "Good boy", before she suffered a heart attack and died on the spot.

As kaiseress she was succeeded by the then-Prince of Elwynn, Jonathan, who took on the kaisership as Kaiser Ayreon III.

She was buried in a private ceremony in the Valley of Mors.