Admiral of the Bovic Empire of the Natopian Nation and commander of the NDF force deployed to Leng in 1663.

Born a Tyrenian, the illegitimate and unacknowledged son of Marcus Lucius Praetor, despot of Tyrenia, Isacco Giustinianni was raised in the household of his mother, the Marchesa Brigida Gabriela Giustinianni. Educated in the maritime professions, he served first with the family fleet and later with the Tyrenian navy, seeing limited action during the Euran War. After the depredations of the Maritime Free Republic devastated the family's trading fleet and led to their bankruptcy, Giustinianni was disillusioned with Jingdao after the empire granted asylum and sanctuary on Dromosker Island to the pirate leader Walter Poldark.

The chaotic aftermath of the Jexit period left Tyrenia, now rechristened as Tiě Gǎng, in a ruinous state, and saw Giustinianni bereft of even his former state salary. Thoroughly alienated from the Jing, Giustinianni was able to convince the crew of a small motor torpedo boat to smuggle him across the Dyre Straits to the Natopian colony of Tinalkina where he claimed asylum whilst the crew deserted with their boat and took up a life as independent traders.

By embellishing his war record and playing on the strongly anti-Jing sentiment of his debriefers, Isacco was able to talk his way into a lieutenancy with the 1st Dominion Fleet. Promoted to captain for his conduct during the Hammish Civil War. Assigned to command of the NDS Remembrance, an assault ship, he was mobilised as part of the War of Jingdaoese Immolation but saw no action against his former Imperial masters beyond monitoring the occupation of Jingdaoese territory by the New Zimian War League. The observation mission gave him rare first hand experience with the rising Palliscian power which baffled many of the older generation of staff officers in Shireroth and Natopia.

Following the outbreak of Alexandrian Flu and the consequent decision to evacuate Tinalkina and the Skerry Isles, Giustinianni was chosen for his knowledge of the waters of the Captive Sea, to serve as the Natopian emissary dealing with the issues arising from a hurried evacuation of the dying colonies. Experience gained in dealing with panicked colonists, restive natives, opportunistic Babkhi and the menacing Dromosker war canoes, transformed Giustinianni into a pragmatic diplomat as well as an officer. His ostensible charm masked a ruthless streak which manifested itself when he burned a series of villages on the outskirts of Osman which had refused the evacuation order. He faced no lasting censure for these actions and his success in helping the Natopian Empire extricate itself from its former empire assured him of his promotion to Commodore. 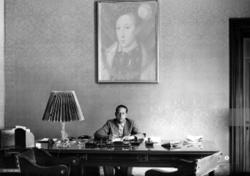 The deepening alliance between Shireroth and Natopia had resulted in the creation of unified theatre commands based on the various continents of Micras. Keltia Command home to no core territories of the allied powers, ranked a poor fourth in the list of priorities behind Tapfer, Benacia, and Apollonia. In spite of this, Keltia was assigned to the NDF as the evacuation of Shireroth's overseas empire had reduced its interests in the region to the lowly Skerrian island of Talenore whilst Elijah's Rest in contrast was a site of symbolic, although not strategic, importance to the Bovic Empire. This changed as the rising military power of Passio-Corum, funded by the USSO Common Market, became an increasing threat to allied supremacy at sea. With most naval assets tied up in containing the Jingdaoese navy in the wake of the Battle of Carama Bay the rising priority of Keltia could only be met by deployments of ad hoc forces and the encouragement given to the cantons to arm themselves. In this environment, the unfortunate departure of General Fulcher from Keltia Command, hospitalised after eating a meal prepared from spoiled canned meat, was fortuitous as it cleared the way for Defense Secretary Kalirion to appoint a replacement with both experience of the ways of the enemy and the right skill-set to make do and improvise under trying circumstances.

In 1663 he was transferred to Benacia Command and attached to the Northern Banner Group garrison on the arctic island of Leng, noted as a frozen hell where guards and prisoners toiling in the iron mines were condemned alike.