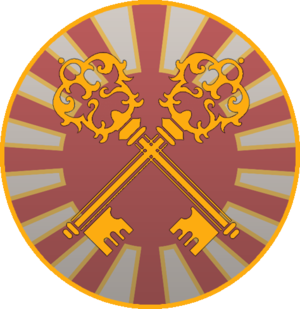 Emblem of the Imperial Stewardship.

The Imperial Stewardship, overseen by the Head Steward is an organisation within the Imperial Household. The stewards oversee and control the entrance and departure of goods from the premises of the Imperial Household. Their most public function is within the Daocheng Palace where they welcome or refuse entry to international diplomats who come to pay tribute to the Heavenly Light. The stewards work closely with the Imperial Treasury and the National Museum to correctly appraise the financial and historical value of tribute that is offered. While international affairs are formally delegated to the Ministry of Stability, the power of the Imperial Stewardship to deny entrance to diplomats gives real power to the institute. As they are expected to act on behalf of the emperor, absolute infallibility is demanded from stewards.

Traditionally, the stewards give up their last name once they join the service of the emperor. Instead they take the regal name of the emperor as their new last name and are given new first names by the emperor. They celebrate the date they entered service as if it was their birthday.