This Article refers to the Imperial Parliament of the Empire of the Alexandrians. Others may exist.- Ed. 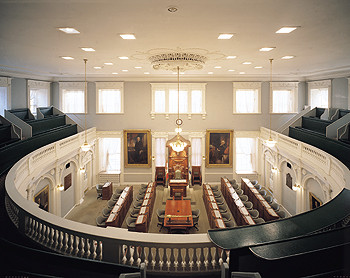 The Parliament of the Empire of the Alexandrians (commonly referred to as the Imperial Parliament) is the supreme legislative body in the Empire and its territories. At its head is the Sovereign, Emperor Edgard II.

The first sitting of the Imperial Parliament convened in October 2005. It is currently in its ninth sitting as of October 2007.

The parliament is unicameral. The Imperial Parliament is a democratically elected chamber with elections to it held at least every 3 months, and it meets in the Palace of the Tuileries, in the city of Geneva. The Alexandrian Constitution of 2005 sets up the legislature to be composed of one elected member from each province, one elected member from the Overseas Electoral District, and the Prime Minister of the Empire. All territorial entities such as overseas territories and colonies are grouped into the Overseas Electoral District, or OTED.

Before the Imperial Parliament was created, the legislative body of the Empire was the Estates-General, where all the citizens of the Empire could participate. The Estates-General was unicameral, despite being subdivided into the First Estate (nobles), Second Estate (clergy), and the Third Estate (all others) (all Estates met together in the same chamber).

The Estates-General was known for being very unorganized, leading to chaotic and confusing practices and processes. However, with the advent of the Golden Triangle Reforms of 2005, the governmental structure of the Empire was dissolved and replaced - leading to the creation of the Imperial Parliament to replace the Estates.

The Parliament according to the Constitution

Here we reproduce a copy of Part VI of the Constitution of the Empire, where it talks about the Imperial Parliament, the members, the elections, the rules, etc.

(1) The Legislative Power shall be vested in a unicameral Imperial Parliament, and shall sit for a session in duration for three months. The legislative power of the Imperial Parliament includes the power to ratify treaties with other states. Treaties not ratified within six months have to be revoked by the Emperor.

(2) The Parliament shall consist of one Member from each Territorial Division of the Empire of the Alexandrians, and the Prime Minister of the Empire.

(3) Ministers sitting in the Imperial Parliament have the duty to propose, debate, and vote on bills brought before them. A Minister who has not voted on any question within 15 days is deemed to have forfeited his seat.

(4) The Parliament shall meet in the place where the Government has its seat. Provided that in extraordinary circumstances the Parliament may assemble elsewhere in the Realm.

(5) The Members of the Parliament shall be bound solely by their own conscience and not by any directions given by their electors.

(1) Any person who has a right to vote in Parliament elections shall be eligible for membership of the Parliament, unless he has been convicted of an act which in the eyes of the public makes him unworthy of being a Member of the Parliament.

(2) For any person to have the right to vote in Parliament elections they shall have to register their name and other contact information in the Provincial Registry of their territorial division of residence.

(1) The Members of the Parliament shall be elected by general and direct ballot. The Prime Minister of the Empire calls for these by-elections in each territorial subdivision.

(2) Elections to Parliament are held the second weekends in February, May, August, November, or when the Parliament has been dissolved.

(3) Vacancies must be filled by the parties of the members who last occupied those seats. If the seat was held by an independent, the Emperor must appoint another independent to the vacancy.

(4) Each party may nominate a party list with up to as many candidates as there are seats. Independents also may nominate.

(1) All legislative bills, excepting matters discussed in Clause 6 of this Article, must be approved by Parliament before they can be submitted to the Crown for the Imperial Assent.

(2) Any Member of the Parliament shall be entitled to introduce Bills and other measures.

(3) No Bill shall be finally passed until it has been read three times in the Parliament.

(4) Two-fifths of the Members of the Parliament may request of the Speaker that the third reading of a Bill shall not take place until twelve week-days after its passing the second reading. The request shall be made in writing and signed by the Members making it. Provided that there shall be no such postponement in connection with Finance Bills, Supplementary Appropriation Bills, Provisional Appropriation Bills, Government Loan Bills, Naturalization Bills, Expropriation Bills, Indirect Taxation Bills, and, in emergencies, Bills the enactment of which cannot be postponed owing to the intent of the Act.

(5) In the case of a new election and at the end of the session all Bills and other measures which have not been finally passed shall be dropped.

Article 20 [Speaker] The Speaker of the Parliament has the duty to organize Parliament’s agenda and to recognize all proposals put before the house by its members. The body must elect a Speaker by majority vote before proceeding to other business.

Article 21 [Rules] Parliament may implement its own rules, and in the event the expulsion of a member is necessary, it shall be done by a two-thirds vote of the body. As representatives of the people of Alexandria, it is the duty of all Ministers to conduct themselves in a polite and gentlemanly fashion in Parliament. At no time shall profanity, personal insults or slander be tolerated, and the Parliament must set rules to this effect.