The Country of Highpass is an autonomous country of Sanama. Highpass became Sanaman territory following the Treaty of Amity and Cooperation between Sanama and Shireroth and Operation Harrowed Veldt. It is bordered by Tellia to the west, Elwynn to the north, Shimmerspring to the east, the Shirerithian county of Caverden to the northeast, and to Cisamarra, Sanama proper and Thanatos in the south. Imperial sovereignty over the county had been mostly nominal since the Kalirion Fracture, and the region was prey to various warlords, tribal factions, and guerrilla armies, the most prominent of which was the Istvanistani Patriotic Army and the Kalisa Passikaans. The territory was conquered by Sanama in Operation Harrowed Veldt.

Highpass is dominated by the grasslands, or Veldt. The two major cities are Rhodondra, the administrative capital and the southern town of Spleazure (pronounced Splee-zyuhr). There are many small towns, hamlets and settlements in and around the Veldt, including Tusk, Rantingstone and Newtell. 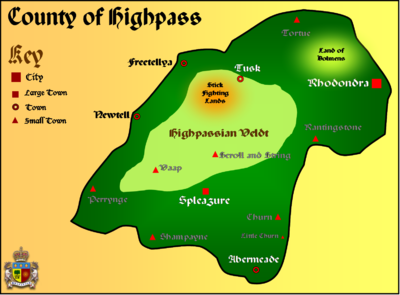 The Veldt is a vast area of grassland stretching from northern Tusk to southern Perrynge. Populated by such species as Aaak Birds and the Wulde Boar, it is a popular hunting ground and because of this there are many historical hunting towns surrounding the Veldt.

The Wulde Boar is farmed on the Veldt and is an important part of the local diet. It is also kept by farmers because its footsteps help prepare the soil for the planting of Graan, which can be brewed for beer.

According to the census of 1559 AN, Passikaans was the largest language by far in Highpass. It was spoken by 3'268'383 (77.51%) people. The largest minority language was Sani, with 624'497 (14.81%) native speakers. Istvanistani was only spoken by 253'425 (6.01%) people. The catastrophes of Lichdom and daemonic rule completely upended this situation, as will be discussed in the demographics section below.

Here are some phrases in Passikaans:


Not a single person was found in Highpass capable of speaking Praeta with any degree of precision by the Army of the Southern League as it liberated the region from daemonic rule during the year 1662. Edicts for the remedial re-education of the populace were issued by the Prince of Modan in the aftermath of his conquest but had little enduring impact.

To understand the scale of the catastrophe that befell Highpass during the era of non-human rule, we need only consider the census returns as presented below:

The assimilation of Passikaan society into the revenant "post-human" society propagated by Lichbrook left the territory hopelessly exposed when the "unlife" sustaining esoteric energy fields rapidly degenerated and collapsed between the years 1640 and 1648. A full 78% of the population crumbled into a mulch of dust and bones, the bonemeal harvested from which has been one of Highpass' greatest single exports over the subsequent 15 years.

The County of Highpass was once fiercely tribal with constant battles between those in the North and the South. This regional violence continues today in the form of Steikfaat, a martial art based on the ancient battles of the Veldt. Fighters take branches of the Veldt Acacia Tree tied to the bones of the Aaak Bird to form intimidating weapons, sometimes up to nine feet in length.

Fighters from all of the towns of the region gather in on the outskirts of the city of Tusk to take part in the yearly Steikfaat tournament. The winner of the tournament is declared Champion of the Veldt. A quirk of the Charter of Highpass, declared by Count Oze decrees that the means of winning at Steikfaat shall never be recorded. Because of this, all of the fighters have their own idea of how to win.

Steikfaat is usually carried out in the name of the demi-god of Broken Limbs, Spleazure.

While Steikfaat interests the more barbaric north of Highpass, the southern towns Abermeade, Churn and Shampayne enjoy a rich musical culture. Highpassian Folk Music can be heard on the streets of these towns on most days. With its bending notes and intricate ornamentations, Highpassian music could be considered one of the most difficult styles to play. Count Oze himself enjoyed the intricate Highpassian Fiddle, and often invited himself to make guest appearances on stage with the band Veldt Noise, which itself has crumbled to dust along with so much else in the county. The musical tradition has persisted amongst survivors and the Passikaan lament is a musical form that has become synonymous with the tragedy and trauma endured by the entire continent, so much so that it has become an art form resonant with Southern Benacian audiences far outside of the diminished community from whence it originated.

Most of the residents of Highpass are firm Cedrists, worshipping the local deities of Rhodondra and Spleazure with various explosions. Natives of the Veldt may also be followers of the Way of the Veldt, a way of life passed down for centuries.